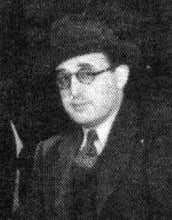 Dwain Esper (1892 - 1982) was a director and producer of exploitation films (some of which were written by Esper's wife, Hildegarde Stadie). He is considered to be one of the worst directors of all time, and his films have become cult classics for being so notoriously bad. Some view his work as being unintentionally funny. Esper died in 1982. He and Hildegarde had two children, Dwain, Jr. and Millicent.