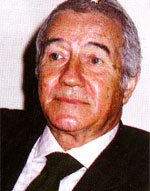 Duccio Tessari (October 11, 1926 - September 6, 1994) was an Italian director, screenwriter and occasionally actor, considered one of the fathers of spaghetti westerns.[1]

Born in Genoa, Tessari started in the fifties as documentarist and as screenwriter of Peplum films. In 1964 he co-wrote Sergio Leone's A Fistful of Dollars, one year later he gained an impressive commercial success and launched the career of Giuliano Gemma with A Pistol for Ringo and his immediate sequel, The Return of Ringo.[1]

He later touched different genres and worked in RAI TV, directing some successful TV-series. He died of cancer in Rome, at 68.[2] He was married to actress Lorella De Luca.[1][2]