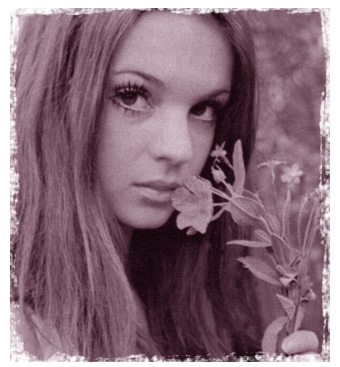 Britt Christina Marinette Lindberg (born 6 December 1950, in Gothenburg, Sweden) is a Swedish actress, glamour model and journalist. She is Sweden's most famous centerfold and exploitation film star. She grew up in a working class home in Annedal, Gothenburg, together with her sister and three brothers. [1] She then studied Latin in school and planned to continue her studies in archeology. While in high school, (around 18) she started posing nude for men's magazines, such as FIB aktuellt and Lektyr. After getting some attention posing in bathing suits for newspapers, [2] she became a popular centerfold due to her doe-eyes, sweet doll-face and well-proportioned body. She later appeared in men's magazines such as Penthouse (UK), Playboy (U.S.), Lui (France) and Mayfair (UK). She was a Penthouse Pet in the June 1970 issue of Penthouse. [3]

Christina's acting debut was in the coming of age-sexploitation film Maid in Sweden (1969). After this, she several more exploitation films followed, many of which were filmed in Germany and Japan. As part of the marketing campaign for the film Exposed aka The Depraved (1970) she went on a publicity trip to Japan, which later resulted in an invitation to appear in Japanese exploitation films. She played a major supporting role in Norifumi Suzuki's Pink film classic Sex & Fury (1973). In 1972, she played the role of Frigga in Bo Arne Vibenius's controversial rape-revenge film Thriller: A Cruel Picture. Director Quentin Tarantino expressed his admiration for both the film and Lindberg's performance. [4] and Frigga served as an inspiration for Daryl Hannah's character in Tarantino's Kill Bill films. In Kill Bill he also borrowed elements from Sex & Fury. [5] This film is now is the one which Christina is most identified with. In the 2000 Swedish action-comedy spoof Sex, lögner & videovåld, Christina made a brief cameo as Frigga.