• Related: Ozploitation: Exploitation From Down Under • Not Quite Hollywood 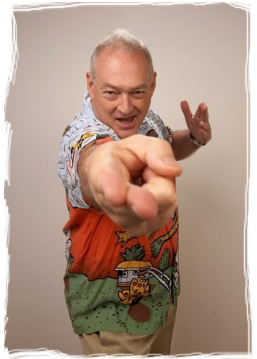 Brian Trenchard-Smith (born 1946) is an English film and television director, producer, writer, consultant and actor who is notable for his contributions to the horror and action genre during the 1970s and 1980s in Australia. Most of his work has been in television, and the majority of his films have been direct-to-video releases. His 1970s and 1980s Aussie films were theactrically released. He generally works in the drama, action and horror genres. He has directed 42 movies and TV series including Turkey Shoot, Stunt Rock, Dead End Drive-In, The Man From Hong Kong, and BMX Bandits

In addition, he also has been credited by Quentin Tarantino as one of his favorite directors.[1]

He was born in England and made his first film at the age of 15 on 8mm. Called The Chase, it was about a lunatic who escapes from an asylum and chases a boy around the countryside with a bayonet. He was commissioned to make a film about his school, Wellington College, for prospective parents. He showed this around once he left school, and it helped him get work as an editor's assistant and camera assistant. He moved to Australia in 1955 and worked at Channel Ten as an editor, doing news, documentaries and trailers. He moved over to Channel 9 to work as promotions director, then in 1958 went to work in London as a junior writer/producer of feature film trailers at National Screen Service. In 1970 he returned to Channel 9 as network promotions director, and made his directorial debut with a French TV special Christmas in Australia.[2]

After two years at Channel 9 he formed his own production company, borrowed $16,000 and made a one-hour television special about stuntmen called The Stuntmen featuring Grant Page. This was a success an enabled him to make a number other TV specials, usually with a theme of action and/or danger. Kung Fu Killers, which also featured Page, was particularly successful.[3]

Trenchard-Smith was going to Hong Kong to make a documentary on Bruce Lee called The World of Kung Fu but arrived on the day Lee died. He turned the documentary into a tribute on Lee, and in the course of making it met Raymond Chow who helped fund Trenchard-Smith' first feature, The Man From Hong Kong (1975). The film was successful internationally launching his career as a feature director.

Among his most fondly remembered credits are the cult classic Turkey Shoot (1982)[4] and BMX Bandits (1983), where he worked with a young Nicole Kidman.[5]

He says his passion project is to do a revisionist history of Richard III.[6]