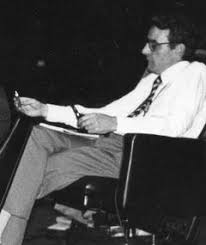 Born Jackson Barrett Mahon, Barry Mahon (1921-1999) was an American director, producer, writer and cinematographer. Mahon was born in Bakersfield, California in 1921. He earned a pilot’s license before a high school diploma and was one of those extraordinary young Americans who ‘volunteered’ for service with the British Royal Air Force to combat Nazi Germany (before the U.S. even joined the war). He flew ninety-nine missions, shot down six German aircraft, and was even decorated by the King of England. However, before being transferred to the American Air Force he was shot down over France. He served the remainder of the war on the ground at a German POW camp, but not before escaping twice. In fact, his exploits and those of his fellow prisoners (specifically, their tunneling skills) later served as the inspiration for the famous 1963 film THE GREAT ESCAPE.

Upon returning home from the war, he started flying domestically and eventually found himself the personal pilot for Hollywood golden era movie star Errol Flynn. The two hit it off quick and in Barry’s own words “one thing led to another, and after a couple of bottles of Scotch he hired me as agent and manager.” This new business relationship led to producing opportunities on Flynn pictures and by decade’s end Barry was directing.

Barry’s first directing gig was CUBAN REBEL GIRLS (1959), a black and white B movie about the Cuban revolution starring Errol Flynn as himself and shot on location in Cuba with the explicit participation of Fidel Castro. Flynn was a vocal supporter of the Cuban revolution and eager to share the propaganda. Fifty-year-old Errol Flynn was also passionate about his teenage co-star Beverly Aadland (with whom he was having an affair) and cast her as an American tourist named (what else?) Beverly. Flynn completed the picture, but died of a heart-attack before its release. Barry’s wife Clelle was also an actress in that picture. She’d go on to be a producer herself and worked as Barry’s script supervisor on a number of titles.

Barry soon found himself in the Big Apple, shooting pretty girls in the dirty city with titles like MORALS SQUAD (1960) and VIOLENT WOMEN (1960). This was the birth of New York exploitation scene and he was right there in the thick of it, making a quick buck like everyone else. He averaged five movies a year for the next ten years and his work almost exclusively featured naked women - because it always sold. In his own words “We are looking for the business; that’s like turning out Ford cars or anything else. If there is a certain profit per picture and we make so many pictures, then we have established a business that is on a basis that’s economical. So far in our nudie output we have never failed to make our money back and a reasonable profit on any picture…So we have decided to stick to these films because it seems to be like cowboy pictures - every nudie is the same but every Saturday they will go to see a new one. You follow the same formula but with different background and different girls.”

His work was always quick and cheap, but also diverse in content. Plot lines included everything from Miami nudist camps like THE BEAST THAT KILLED WOMEN (1965), voodoo-zombies loose in New Orleans with THE DEAD ONE (1961), a ‘ripped from the headlines’ thriller ROCKET ATTACK USA (1961) about the U.S.S.R. Sputnik launch, an Ed Wood style ‘biography’ on the transexual experience I WAS A MAN (1967), and even children’s pictures with well-known and bankable properties like THE WONDERFUL LAND OF OZ (1969) and JACK AND THE BEANSTALK (1970).

Barry spent the last twenty years of his life retired from the movie industry and passed in 1999 of heart failure at the age of 87. He had three children with his only wife Clelle, all of whom worked in varying capacities in the industry. Specifically, his daughter Doris was a 1980s television producer who even penned a teleplay for a CBS original movie about Errol Flynn called MY WICKED, WICKED WAYS.

Although Barry Mahon was no auteur and maybe even had a negligible inclination for the artistry of filmmaking - he nevertheless was one of many prolific film producer/directors of the 1960s nudie and exploitation world. He was also in some ways a textbook example of determined Americanism; a veteran who defied enemy imprisonment and an innovative businessman who carved out his own lucrative career from a changing marketplace (acceptance of nudity in movies). Again, in his own words:

“Some argue that censorship is essential. I say no it is not. We are basically intelligent people and I don’t confine that attribute to the United States. Countries today that get to a point of worrying about censorship are intelligent. It’s the reaction of intelligent people who resent being told what they can or cannot see. But, in effect, we still have a hangover of religious and moral feeling that exists even within the most free-thinking people that I have talked to. They talk at length in courts against censorship, but when they go home at night and their 16-year-old daughter asks them about sex, they are not prepared to tell them. That’s a form of censorship, and it is probably a far more important form than the arguments they had in court during the day.”