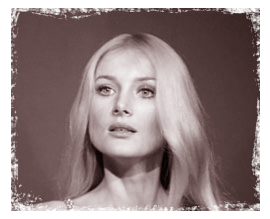 Barbara got her start as a dancer on the American teen rock'n'roll TV show "The KPIX Dance Party" (1959-1962). Bouchet began her professional acting career as a model on magazine covers and an actress in TV commercials. She made her film debut with an uncredited bit part in the comedy What a Way to Go! (1964). She went on to play a sexy version of Miss Moneypenny in the comedic James Bond spoof Casino Royale (1967), and had guest spots on such TV series like "The Virginian" (1962), "Star Trek" (1966), "Voyage to the Bottom of the Sea" (1964), and "The Man from U.N.C.L.E." (1964). In 1970, Barbara moved to Italy and became one of the country's biggest stars.

For classic exploitation film fans she is widely known as a stunning beauty who has had memorable parts in Italian genre films like the gialli Black Belly of the Tarantula (1971), The Red Queen Kills 7 Times, Don't Torture A Duckling (1972) and poliziotteschi (Italian crime-action films) such as Milano Calibro 9 (1972), Ricco The Mean Machine (1973) and Death Rage (1976).

In 2002, Barbara got a role in Martin Scorsese's historical epic Gangs of New York. She played the part of Mrs Schermerhorn. Barbara's popularity in cult cinema was also reinvigorated when several films she starred in during the 1970s were released on DVD.

Barbara currently lives with her family in Rome, where she is a member of the city's celebrity social life. She continues to work in films and television as well as her various business enterprises.