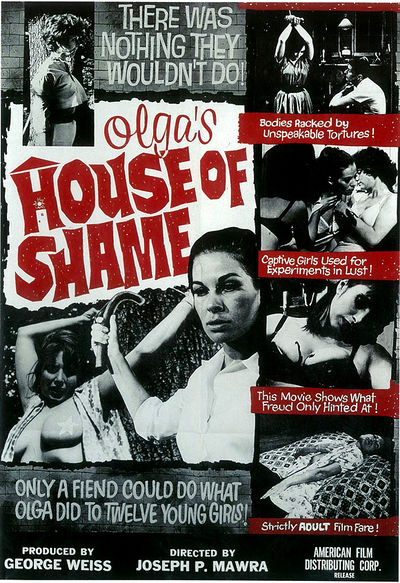 American Film Distribution is the New York based Exploitation company led by Stanley Bordon, a film distributor whose career started to gain success in the 50's. At first, they specialized in films imported into the States, but later became better known for in-house productions. The most notable breakthrough hit came early on with Olga's House of Shame in 1964 starring Exploitation icon Audrey Campbell, and they followed it up with a long line of Grindhouse favorites through the 60's before fading away in the early 70's. The company was notable for distributing films made by Exploitation directors such as Michael and Roberta Findlay (The "Flesh" Trilogy, A Thousand Pleasures), Joseph P. Mawra (Olga's House of Shame), and Larry Crane (The Love Captive, All Women Are Bad). For the majority of their existence, their films were in B&W and that that suited them perfectly, as most of their films were of the Roughie genre, best offered by the Findlays' now legendary films for the company and even unique and somewhat over the top one-shots like Giulo Alti's Watch the Birdie (Featuring Rocky Robert's classic "The Bird's the Word" featured later in The Wild, Wild World of Jayne Mansfield).

By the time they were slowing down, the films were moving into lesser quality, but sometimes that resulted in something that was at least unique like the disjointed and pseudo-arty Fluctuations, a film that was its own warning in the long line of unique Something Weird Video DVD warnings (From the back cover: "This program contains nudity, sexual situations, and... uh...whatever the hell Fluctuations is"). By the time they released their last films, they may not have expected that their work would be of interest to those interested in the history of Exploitation films, but American Film Distribution had some of the most unique films to move through the Grindhouses in The 60's and a style that would give its own distinct character to its titles, occasionally with the voice of Joel Holt, who provided the narration for most of the Olga series, many of the company's trailers, and other films. In a way, some may call it fitting that it was they who would unleash what is sometimes called the last of the Nudie-era Roughies in 1969 with She Came On the Bus in a time when things were moving to more X-Rated extremes, and it could be said that the timing and the occasionally groundbreaking films presented by a company who would personify the New York Nudie scene of The 60's gave the company a true legacy in Exploitation Films.

In an era when Exploitation films were carried by a number of companies in different regions of the States, a number of their films were distributed on the West Coast through Crest Distribution, while Olga's Girls was distributed there by Bob Cresse's legendary Olympic International.