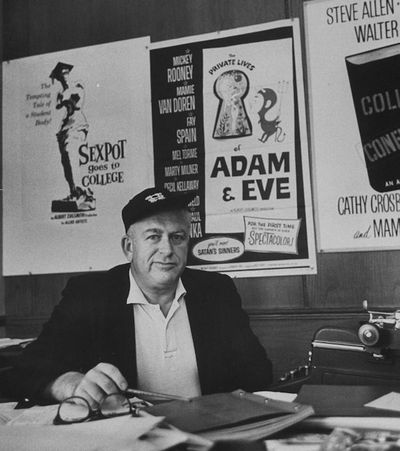 Albert Zugsmith (April 24, 1910 – October 26, 1993) was an American film producer, film director and screenwriter who specialized in low-budget exploitation films through the 1950s and 1960s.

With a background in journalism, Zugsmith became independently wealthy and began producing films at RKO during the Howard Hughes years. Zugsmith's most significant credits are a string of four genre masterpieces produced in the late 1950s, all for Universal Studios: the science-fiction classic The Incredible Shrinking Man, Orson Welles' Touch of Evil, Douglas Sirk's Written on the Wind, and the camp exploitation films High School Confidential and The Girl in the Kremlin. [1] An archive of some of his shooting scripts and screen plays are housed in the Special Collections department at the University of Iowa.

His older sister, Leane Zugsmith, was a leading proletarian novelist in the 1930s. Al also had a daughter, Patty, who was born around 1942 and went to Van Nuys High School in the San Fernando Valley, during the late 1950s.