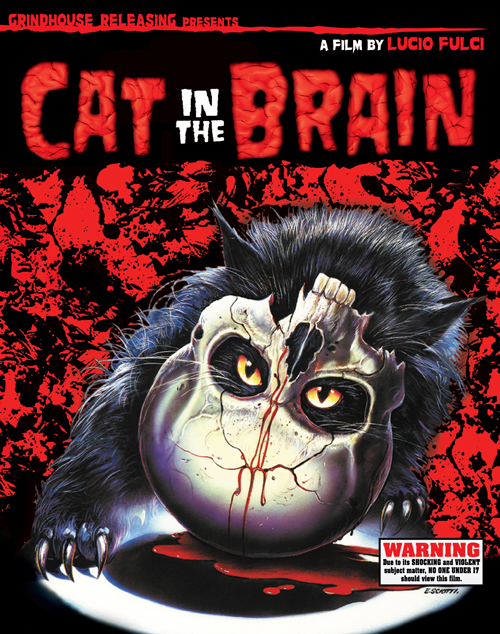 LISTEN TO A SAMPLE

In 1990, The Italian Godfather of Gore, Lucio Fulci directed and starred in this macabre movie masterpiece about a filmmaker that begins to experience frightening hallucinations brought on by his violent horror movies. The main character is named "Dr. Lucio Fulci", clearly based on the real man who began his professional life as a medical cardiologist then quit to become a screenwriter and later a director.

Our film begins with a nasty scene in which a deranged cannibal killer (Brett Halsey) cooks up a chunk of flesh from one of his victims and then grinds up the body into hamburger and feeds it to his pigs. Yum! After wrapping the film shoot, Director Fulci visits a nearby restaurant where he becomes ill when the waiter brings him a plate of raw steak tartar. It's pretty easy to see why he'd get queasy.

Fulci goes home to rest after a tough day at the studio but he has a nightmare and hears a loud chainsaw outside his apartment. He then envisions his neighbor sawing a body up, covering himself in blood. As the disturbing visions continue, he smartly decides go see a psychiatrist Dr. Egon Swharz (David L. Thompson) to try to find out what is happening to him. Shwarz explains to Fulci that his mind is beginning to break down the barrier between what is fantasy and what is real. So basically he's going totally nutty.

In one of the more revealing sequences, an actor performing in a movie scene cruelly slaps a young beauty as Fulci spurs him on in a frenzy, babbling and ranting as the bloodied girl gets groped and licked by the man. The film shows the fictional Dr. Fulci has an obsession with slapping women as it happens a few times in the film. Whether this was a fetish he had in real life or just one created for his character, we can't be sure.

While Fulci's mental state becomes more erratic, the esteemed Dr. Swharz reveals himself to be a deranged psycho and begins committing murders for real, using Fulci's problem to create an alibi as the police try to figure out who's behind the killings. There are several very nasty attack sequences including a prostitute being hacked up and one where Swharz strangles his wife (Malisa Longo) and nearly decapitates her.

Cat in The Brain has all the ingredients usually found in a Fulci horror film but the thing that stands out the most is the fact Fulci is the lead actor. You can't say that he's an amazing talent in front of the camera but his performance works especially well because of the reputation he has as an enigmatic master of horror cinema. A director Fulci seemed to be influenced by was Alfred Hitchcock and you can see this in the many small cameos Fulci had in his own movies over the years. If you don't know much about Fulci as a person, you'll be able to see him up close here as he hams it up for the camera showing various sides to his personality from his fears to his fantasies. It's actually a nice swan song he gave to his fans.

Cat in The Brain, which also went by the alt title "Nightmare Concert", is certainly one of Fulci's most intriguing films as it combines his trademark gore and gallows humor with a self reflexive quality which over the years has drawn it comparisons to Fellini's 8 1/2. Now, these two artists obviously made different kinds of movies (both equally brilliant for the genres they dealt with) but I would agree that Cat in The Brain could be considered Fulci's own twisted, exploitation version of that surreal Fellini classic. Like that film, Fulci shot several scenes in and around Rome's famous Cinecitta Studios. Where the films differ the most is in the fact Fulci created Cat in The Brain almost entirely in the post-production process using clips and outtakes from his own movies and ones he produced (they include Sodom's Ghost and Touch of Death from 1988). This was essentially a "cut and paste" film. Nevertheless, the end result is captivating to watch as it becomes a peek inside the mind of horror cinema's most loved genre auteurs.

PICTURE: Presented in (1:66:1) 1080p High Definition Widescreen. Originally filmed in 16mm then blown up to 35mm, Cat in The Brain's overall visual quality is good but not exceptionally great. Still, this newly restored 2016 Uncensored Director's Cut is the best transfer yet so fans shouldn't be dissapointed.