Another great cannibal film from the same time and has a similar story to Cannibal Holocaust, but I heard this movie came out first. I originally saw this film at the Grindhouse theatre in Los Angeles. While I was waiting in line, people began discussing that things may get ugly soon because P.E.T.A. were on their way to the theatre to protest this film. The reason being that there are quite a few scenes in the flick where they use actual footage of animals being killed by other animals. These fucking P.E.T.A losers aren't always the friendliest either; it's a good thing that I brought my .45 and enough ammo to be able to drop at least three of these fuckos down for good if needed. One of the guys in line made a picket sign to protest the P.E.T.A fucks. He marched up and down Beverly Boulevard with a sign that said, "Cannibals have rights too." There was much laughter and the crowd was preparing to fuck up some P.E.T.A hippies. All of the sudden, a guy shows up wearing a P.E.T.A. shirt and notices that none of his friends were there. 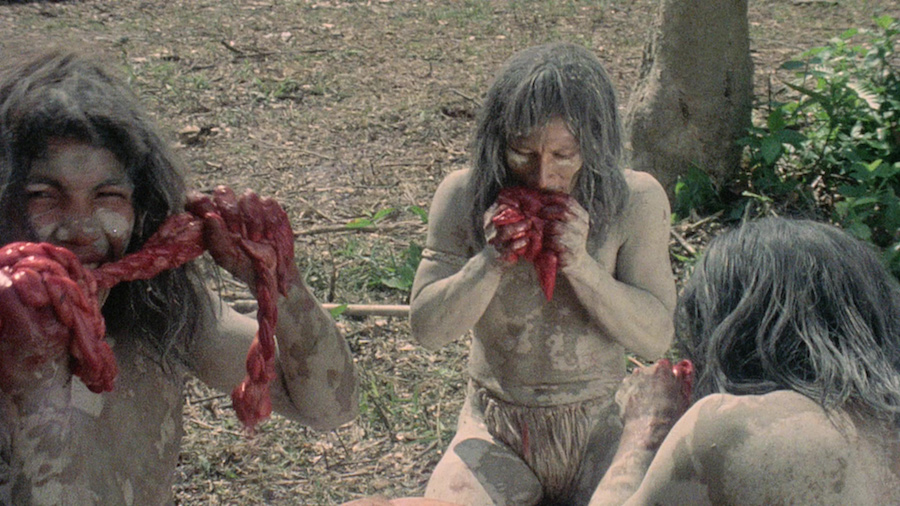 Before the crowd had time to react, a car pulled up to the curb and our P.E.T.A. friend was off to his next rally. The crowd began to cheer as if we won some type of melee. So did the movie live up to the hype? Fuck yeah it did! Halfway through the movie, I had to take a piss so bad that I pissed in my almost empty 40 oz of Mickey's. Some of the piss started to splash on the floor from my dick and the dude sitting next to me looked and said, "if you piss on me, I swear I'll fuck you up bad." I told him not to worry and I was a professional at this. I almost filled up the 40 oz with piss, screwed the cap back on and rolled it down the isle. You could hear it roll down until finally it hit the back of someone's foot.

Now how about I shut up and get to the review now. The movie starts out in New York where two mob guys blast the hell out of this dude in his own home. It turns out that there were three guys that were involved in ripping off the mob, but the other two fled to the jungles to find cocaine. Now after setting up the story about the guys who ripped off the mob, we now have Rudy, Pat and Gloria. Rudy was in the jungle to do a thesis for some prestigious school that cannibals DO NOT exist or some junk like that. They get their vehicle stuck in the mud and meet up with the two guys that I was telling you about before. Oh, I didn't tell you this earlier, but their names are Mike and Joe. Joe and Pat totally hit it off. His first move was he busted out the good coke that he had and then she fucked him. Out of my years of experience and living in Hollywood, I know that if you have plenty of good coke, you can have a hot chick fuck you too. There are three things that make broads put out, coke, money and gold. Later on, Mike tells Rudy, Pat and Gloria that Joe is a psycho because he's all coked up and killed one of the cannibals in front of his tribe. He explains that Joe took a knife out and cut out one of the cannibals' eyeballs and then cut off his dick while everybody watched.

All coked up, Joe and Pat find one of the cannibal girls. They start kicking her ass and then Joe shoots her down. This really pisses off the cannibals and they finally team up and capture everybody. Joe has his cock cut off and then gets the top of his head cut off. The cannibals then begin to eat his brains. The best part of the film is Pat has hooks put through her breasts and then they hang her by the hooks until she dies. This movie definitely wins gold status in my book just for this scene alone. Somehow Rudy gets away and makes it back to New York to do her thesis, in which her conclusion to her thesis is Cannibals Do Not exist like she said. Little does anybody know that they really do exist, but she wants to forget the horrific violence that she witnessed in the jungle.