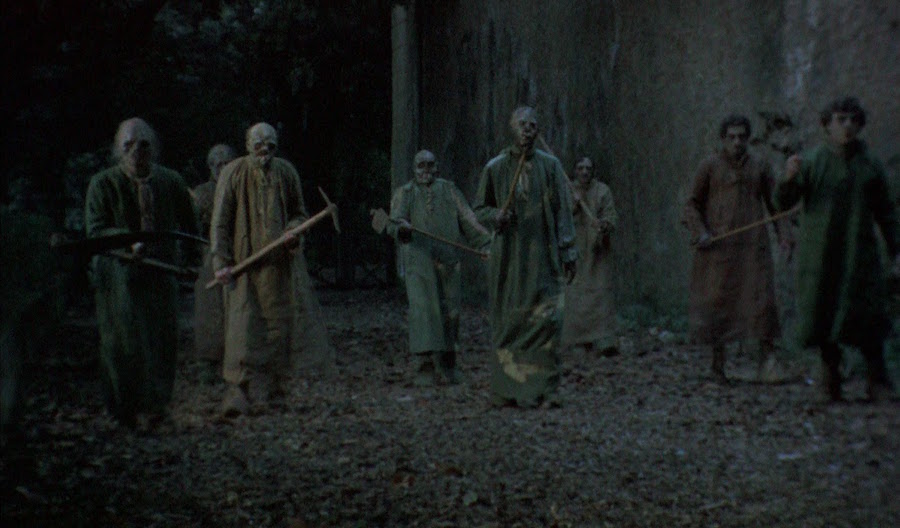 If there is one subgenre within horror that has invaded every facet of today's mainstream media, it's the living dead. Whether through novels (World War Z), critically-acclaimed television shows (The Walking Dead) video games (Resident Evil franchise) or movies (too many to name), zombies - for better or worse - have become a ubiquitous part of pop culture. That said, it can be easy to forget a time when the only major traces of our favorite flesh-eaters were from George A. Romero and a handful of Italian directors. One of the trashier and more memorable efforts is Andrea Bianchi's Burial Ground.

Burial Ground opens inside an old decrepit crypt, with a professor named Ayres unearthing a stone slab covered in mysterious symbols. While digging within the ancient cavern walls, Ayres is suddenly ambushed by zombies and eaten alive. Elsewhere, three couples are on their way to his manor, called upon by Ayres so he can present his exciting new discoveries to them. Upon reaching the grounds, it doesn't take long for everyone to realize that the professor is nowhere to be found, and something evil is lurking nearby in the form of an endless horde of rotting undead...

The viewer knows just what type of depravity they are getting into from the first 15 minutes alone: gory gut-munching, hilariously bad sexual innuendos and over-the-top displays of private - and public - affection. And of course, the infamous incest subplot involving a son (played by the infinitely creepy adult dwarf Peter Bark) and his mother kicks off with him walking in on his parents having sex. Instead of leaving the room, however, young Michael stares longingly at his naked mother. You certainly won't see storylines like this in anything coming out in 2011!

As opposed to the many films that don't even hint at a zombie until the half-hour mark, the attacks from Burial Ground's reanimated corpses come in relentless wave after wave right from the get-go. Although they move much like the zombies seen in Night of the Living Dead, Bianchi's flesh-eaters are a tad bit smarter, with the ability to use toolshed appliances and other weapons against their victims. Boarded-up doors and windows are no match either, as they can scale walls with considerable ease and break down any barriers between them and their next meal.

Burial Ground doesn't skimp out on the red stuff either; decapitations, eviscerations and throat-rippings come fast and furious. The gore effects may not reach the higher standards set by Zombi 2 or The Beyond, but the blood and guts are still impressive and the majority of the zombies themselves look cool when caked in dirt, grass and actual maggots and worms. On the flipside, some are simply just actors' faces with minimal makeup or cheap skull masks, but most of them are relegated to the background and not heavily involved in the carnage.

As a general rule, it's usually best to throw concepts such as logic and sound reason out the window when watching off-beat treasures such as this. When barricading themselves in the mansion, our human heroes split up and go off on their own instead of sticking together in groups. They also have the chance on numerous occasions to run to their vehicles and drive to safety. Instead, they take a dangerous detour to a monastery and then a workshop, getting picked off one by one. Other silliness ensues, including unexplained premonitions, supernatural occurrences with light fixtures and one girl getting caught in a random bear trap! Continuity is an afterthought too, with a character losing his arm to a zombie in one scene, but coming back later with what appears to be both limbs intact. Sure, it's goofy and lacks any real scares or suspense, but Burial Ground is wonderfully cheesy entertainment.

Lastly (fair warning, spoilers ahead), major recognition must be given to Burial Ground for featuring one of the most outrageous endings in the history of zombie cinema. With our final three protagonists trapped and outnumbered, a zombified Michael approaches his grief-stricken mother. Still in mourning, she embraces her son (a previous, equally-disturbing scene unfolds with Michael trying to make out with and fondle her) and allows him to suck on her breast, only to have him hungrily ravage her nipple. Everyone is murdered and the written "Profecy" of the Black Spider is displayed before the end credits, forecasting messengers of death and "nigths" of terror, misspellings and all.

Fans of Lucio Fulci, Bruno Mattei or Umberto Lenzi are doing themselves a grave injustice if they haven't yet experienced the insanity that is Burial Ground. If one can overlook shoddy dubbing, a great deal of nonsense and questionable lapses in judgment, this sleazy slice of exploitation with a mean streak is essential viewing for any zombie aficionado. If you enjoy your gore messy, your characters stupid and your "family relations" up close and personal, then Burial Ground is for you.