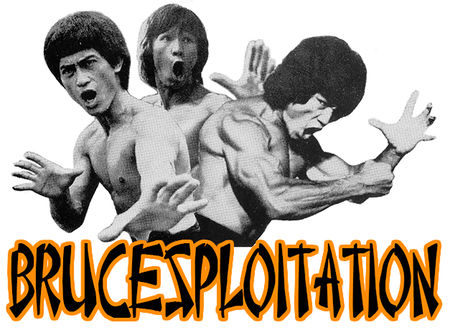 After Bruce Lee's tragic death in 1973 something strange happened. Many film studios began to look at Bruce as a cash cow who had gone too early from the film business. These studios seemed to care about the money they could make off his good name. Their only option was to look for Bruce Lee clones and use them for their own kung fu action films to fill the void he left. This wave of film genre became known as "Brucesploitation" or "Bruceploitation". From approx 1974-1981, many films were made starring guys with names like "Bruce Li", "Bruce Leong", "Bruce Le", "Bruce K.L. Lea", "Bruce Rhee", "Bruce Thai", "Bruce Lai" and "Dragon Lee". Most of the films were low budget and made to be shown on double bills with more popular action/kung fu hits playing at the time. Although the Bruce Lee wannabes couldn't completely replicate Bruce's natural charisma and extraordinary martial arts talents, the films they made actually were entertaining in an outrageous Exploitation-ized way. They are some of the purest "Grindhouse" genre films that came out in the 1970s and are just one reason why this site was started. Many people would look down on these kinds of films, but here at The GCDb, we not only appreciate them, we downright love em!! We've dedicated this page to the actors who became Bruce Lee stand-ins and got Grindhouse audiences cheering with their onscreen exploits. The wild n' wacky Brucesploitation era was something we surely won't see again but we highly recommend checking out the films on DVD and Blu Ray.

The Clones of Bruce Lee