Bruce Lee Vs. James Bond: The Film That Never Was

An Article by Simon Gelten (originally published at Furious Cinema)

Stoner (1974, Huang Feng) is a Kung Fu movie with a truly stunning production history. It was meant to be a (sort of) sequel to Enter The Dragon, only bigger, with a bigger budget and bigger stars. The original title was The Shrine of Ultimate Bliss, and the movie was supposed to star both Bruce Lee and Sonny Chiba next to one-time James Bond actor George Lazenby (The Man From Hong Kong). Expectations were literally sky high. Enter the Dragon had grossed over $100 million worldwide and Shrine was expected to double or even triple this result. Warner Bros. would co-produce and give the film a world wide release and a $10 million marketing budget. 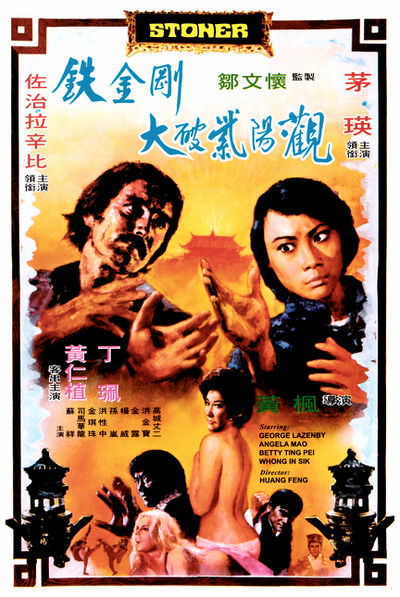 Warner Bros dropped out and so did Chiba because he thought it didn't make sense to make the movie without Lee. Surprisingly, Lazenby decided to stay with the project. Angela Mao Ying and Sammo Hung were now presented as co-stars; both had worked with director Huang Feng before and were among the most popular action stars in the Hong Kong film business, but it turned out to be difficult to sell a "Bruce Lee movie without Bruce Lee." The film also got some bad publicity because it starred Betty Ting Pei, in whose apartment Lee had died; in some articles it was suggested that she had a hand in Lee's death. The film nevertheless did quite well on the local market and turned Lazenby into a minor star within the genre, but it was barely released outside Hong Kong. Today most reference works will tell you that it's a failure (Time Out: Dreadful martial arts potboiler), but genre aficionados tend to be more positive...

I wouldn't know why one would call this movie dreadful. Okay, the script is a bit messy, but let's not forget that Enter the Dragon wasn't an example of sophisticated storytelling either. Unlike the title may suggest, it's not about smoking pot (1), but about two police-officers fighting a crime ring producing magic pills "that will do miracles for both sexes." Lazenby is a no-nonsense cop from Australia, Angela Mao a secret agent from Taipei, and they both want to put an end to the terror of the Chinese drug empire, but while Mao Ying's involvement is strictly professional, Lazenby has a personal agenda: his sister overdosed on the new drug.

The first forty five minutes are a bit slow, with too many scenes illustrating the effects of the magic pills. Those scenes offer a large amount of nudity and are remarkably sleazy for a movie primarily aimed at the home market. Lazenby is almost unrecognizable, sporting a droopy mustache (he shaves it off halfway through) and speaking Mandarin (2). The movie picks up once the action takes over. You can't help imagining what it would have looked like with Lee and Chiba involved in it, but I'd say the movie holds its own quite well.

Lazenby ran 3 miles every morning and trained in fighting techniques for two and a half hours each day to get into shape. He was not a trained martial artist, but there have been claims that he was a fighting instructor in the Australian army. I'm not an expert on martial arts (although I did some judo as a young man) but I think Lazenby did a good job and both Angela and Sammy are wonderful. However, compared to more recent flicks like The Raid (2011), the fight scenes are a bit of the flying circus kind, with the hero being surrounded by a small dozen of opponents, all waiting for their turn to be kicked around.

The Death of Bruce Lee

Bruce Lee died on July 20, 1973, in the apartment of a friend, the actress Betty Ting Pei. He had met producer Raymond Chow earlier that day (they had spoken about their plans to resume the unfinished Game of Death) and was to meet him again in the course of the evening in the Miramar Hotel, where the two men had an appointment with George Lazenby. When Lee did not show up, Chow went to Betty's apartment and was told that Lee had complained about a headache and she had given him a pain killer called equagesic (1). He had gone to sleep and Betty had not been able to wake him up. A doctor was summoned, who tried to revive him before sending him to the Queen Elizabeth Hospital, where he was declared dead. 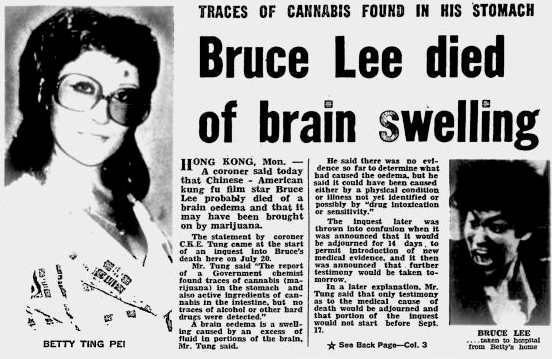 Immediately after his death, rumors start spreading. Lee and Betty Ting Pei had been lovers, most probably still were, and it was suggested that Betty had poisoned him because Lee had threatened to leave her. It was also rumored that some of the people Lee had worked with in the past (for instance director Lo Wei) had connections with the Triads, who were not happy with some of Lee's business plans (2). Lee considered to start his own US based production company because there were too many sticky fingers in and around the Hong Kong movie business. According to friends Lee had received death threats and sometimes carried a handgun while making a walk in the streets.

There were no visible external injuries, but the autopsy brought to light that his brain had swollen up to 13% of its original volume. Lee's death was labeled as "death by misadventure", caused by an acute cerebral edema due to an allergic reaction (3). It quickly became known that Lee had been taken to hospital for similar complaints a few month before his death. In May, when working on the post-synchronization of Enter The Dragon, he had lost consciousness in the Golden Harvest Studios. One of the doctors who had treated him that day, Dr. Wu, stated that a large quantity of hashish had been removed from Lee's stomach. Lee had also suffered from convulsions, a strong indication for the presence of toxins or other agents in the blood (4). The doctor's statement has led to some very wild, controversial speculations (5).

Lee got his hashish directly from Katmandu, Nepal, and he took them orally. Rumors were spread that these unrefined drugs had killed many users in Nepal and Dr. Wu therefore suggested that Lee had died from an allergic reaction to cannabis. He later withdrew his statement after he had spoken to a forensic scientist, who sustained that he had never known of anybody dying from simply taking cannabis. But pain killers and cannabis weren't the only substances Lee had taken in the course of the years. People who had met Bruce Lee in the last weeks of his life confirmed that he looked unhealthy. He had lost up to 15-20 pounds of body weight (quite a lot for such a tiny man), suffered from mood swings and panic attacks and seemed depressed (6).

According to training partners, among them Chuck Norris, Lee had severe back problems (he had ruptured a disk in 1968 or 1969) that often turned his daily training routines into a real torment. Lee took muscle relaxant medication as well as anti-inflammatory drugs such as doloxene. He also had cortisone injections on a regular basis and Norris expressed his opinion that the various medicines had interacted (7). Because some exercises caused him too much pain, he had also started to use electrical muscle stimulation, without any medical assistance or supervision.

We will probably never know what exactly caused Lee's death. Some people still think he was murdered, among them Tom Bleecker, who was briefly married to Linda Lee, Bruce's widow, and wrote a book called Unsettled Matters. Lee was under a lot of pressure; his behavior in the last few weeks of his life suggests that he had stopped using some medicines, or was trying to do so (confusion, paranoia and panic attacks are well-known side-effects), which could have intensified a possible allergic reaction to equagesic or any other drug that was administered to him. He had also taken cannabis in the days before his death, some think to neutralize certain withdrawal symptoms (of no longer using other drugs or medicines). It seems life was asking too much of Bruce Lee, and Bruce Lee was asking too much of his body. 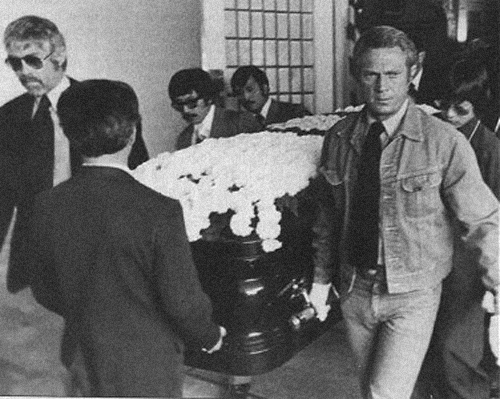 His body was flown back to Seattle, where Lee resided at the time, and on July 30 he was brought to his last resting place by Steve McQueen and James Coburn and Robert Lee.