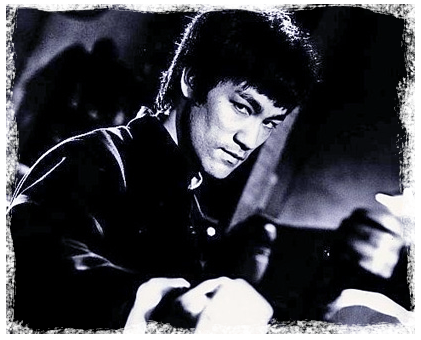 Bruce Lee (November 27, 1940 – July 20, 1973) was born Lee Jun Fan in San Francisco, California. He is one of the biggest icons of action films, and kung fu films in particular. Between the years 1971 and 1973, Lee only made a handful of films, but they were some of the best kung fu genre films ever. His father, Lee Hoi-Chuen, was a star in the Chinese Peking Opera. In his youth, Bruce starred in several low budget Hong Kong films. His persona onscreen even back then showed his tough and cocky side. Growing up, Bruce studied Wing Chun under his mentor Yip Man. Yip Man taught him well and Bruce became one of the best street fighters in Hong Kong in the 1950s.

Bruce moved to America (Seattle, Washington) in the early 60s and he went to college. Bruce studied philosophy and he began training others in the martial arts. At school, he met a young girl named Linda Emery while teaching a martial arts class. They quickly became close and fell in love. Linda married Bruce in 1964. A year later they had a son, they named him Brandon.

Bruce and Linda moved to San Francisco in the mid 60s and this is when Bruce began training many up and coming martial arts students. Among them was a young man named Chuck Norris. Norris trained under Bruce and went on to win several martial arts competitons with his guidance. While doing a demonstration at a Martial Arts Tournament in San Francisco, Bruce was spotted by a Hollywood TV producer. Bruce flew to Los Angeles and tried out for a part on a new action TV show called The Green Hornet. Bruce got the role of The Green Hornet's chauffer/sidekick Kato. Bruce was able to showcase some of his great kung fu skills, but not alot. The Green Hornet show wasn't on long. It was canceled after just one season and Bruce was again looking for work. He took some small roles on other TV shows like Longstreet starring James Franciscus and in movies like Marlowe (1971).

Bruce and a Hollywood TV producer began planning a new TV series based around the Martial Arts. It was entitled "The Warrior". Bruce pitched the project but the TV producers balked. "The Warrior" was to feature Bruce as the main character, but Hollywood execs didn't feel America would accept an Asian as the star of a TV show. After Bruce left the project, the show was recast with an American star named David Carradine. Carradine, the son of classic Hollywood actor John Carradine was an up and coming young actor who could almost pass for an Asian man with a little make up. Carradine accepted the role of Kwai Chang Caine, the half American, half Chinese shaolin monk. Kung Fu premiered in 1972, it became one of the most popular TV series ever. It ran from 1972-1975.

Meanwhile, Bruce was offered a role in a new Asian film for Producer Raymond Chow's Golden Harvest Studios called The Big Boss (1971). Bruce accepted the offer quickly after being very dissapointed with his treatment from Hollywood. After the release of The Big Boss, Bruce became an overnight star in Asia. He made another film for Golden Harvest in 1972 called Fist of Fury. In the film, Bruce was an explosive onscreen presence. The films story revolved around the animosity between Chinese and Japanese martial arts schools. In one scene Bruce takes on an entire school of Japanese fighters and he just lets loose, Its an exhillarating sequence.

In 1972, Bruce recieved a call from Warner Brothers Studios, they had a script for a film he might be interested in. The film was called Enter The Dragon. Bruce accepted the role of "Lee" the avenging shaolin monk and brought Raymond Chow on board for a co-production with Warner Brothers. Bruce created some of his most brilliant and exciting kung fu fight sequences in this film. Enter The Dragon was a sort of James Bond meets kung fu film. The combination worked, it was an excellent hybrid of genres. Bruce shot the film with his fellow actors John Saxon, Jim Kelly and Ahna Capri. After Bruce wrapped on Enter The Dragon, he was stricken ill. He had an allergic reaction to a medication he was taking and got a cerebral edema, which is a swelling of the brain. Bruce passed away before Enter The Dragon was even released in 1973. Enter The Dragon was a huge international smash and became one of the most enduring cult classic films of all time.

Before his untimely death Bruce filmed two other films that were released later on. Way Of the Dragon (1973), was written produced and directed by Bruce. This film and the character Bruce played was probably the most close to Bruce's true personality. It had great fight sequences, great character interaction and showcased a lighter side in comparison to Bruce's usual tough as nails, cocky personality. The films climactic fight sequence featured one of Bruce's old stuidents, his name was Chuck Norris. The battle between Lee and Norris is one of the best kung fu fights ever put on screen.

The other and more infamous film released after Bruce had passed away was entitled Game of Death (1978). Bruce had become a cinematic legend much like his hero James Dean, so this was a perfect excuse for the studios to exploit every last piece of film Bruce had appeared in. The main problem with Game of Death was the lack of finished scenes. The rest of the film was pieced together with stunt doubles and lookalike actors and sadly even cardboard cutouts. Bruce had only really finished the main fight sequence in which he fights a group of martial arts masters on a seaparate floor of a large Chinese pagoda (building). Each fighter represents a different style of martial arts. At the top floor of the pagoda, Bruce's student, Lew Alcindor aka Kareem Abdul Jabbar was the final opponent. Jabbar played the toughest martial arts master Bruce was to fight. The battle is one of the most intense and excruciating fight sequences on film. The 6 foot 7 Jabbar towers over Bruce who was only 5 foot 7.

Many films were made after Lee's death starring lookalikes and wannabes. They were aptly referred to as "Brucesploitation" films. They starred actors like Bruce Li, Bruce Le and Dragon Lee. But of course, none of them ever duplicated the real Bruce Lee. Noone could take his place. There was only one Bruce Lee: The Dragon. Bruce Lee was and is an icon of cinema and martial arts. He will live on forever in the hearts of martial artists and martial arts film fans.