In 1971, the producers of Blood Island films had no new Philippino horror film for the new season, Director Eddie Romero was busy on another film at the time of Brain of Blood. He was working on a Women In Prison film called Black Mama White Mama starring Pam Grier. Romero handed over the reigns to Sam Sherman and Director Al Adamson to do their own new film in the tradition of the earlier Blood Island series. Adamson and Sherman came up with a rather strange storyline for a film they titled Brain of Blood. While many critics thought this film was shot in the Philippines like the previous films, it was actually shot in and around Hollywood. Another interesting note is that the score of this film was actually the same score used for Mad Doctor of Blood Island. This gave the film that certain Phillippino Blood Island audio touch some maybe didnt notice while watching it the first time.

In this new bloody tale, Dr Trenton (Kent Taylor) is in the middle of transplanting a brain from a dead former leader of the nation of Khalid named Amir (Reed Hadley). Hadley looks about as Middle Eastern as Johnny Cash!! The only problem is to keep his brain alive they have to put Amir's brain into a disfigured hulking dope named Gor (John Bloom, the Frankenstein Monster of Adamson's cult classic Dracula Vs. Frankenstein) and then things go wrong. The doctor must control Gor by using a strange laser beam gun which drives Gor crazy when applied. An interesting factoid is that Producer Sam Sherman wrote the film's strangely modern script after Egypt's President Nasser died. 30 Years later this story doesnt seem so bizarre: a Middle Eastern government not wanting to accept their leader's death so they put his brain into another body. 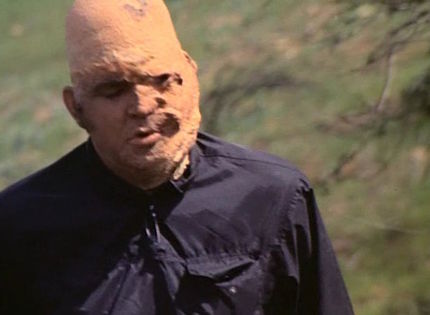 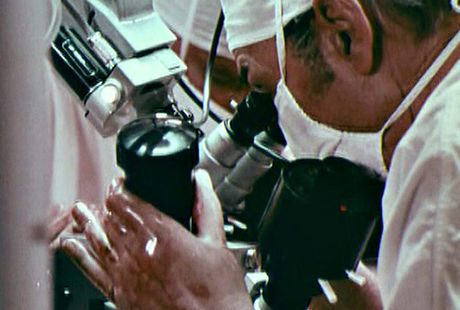 Director Al Adamson delivered a great bloody film and even used several of Romero's own previous Blood Island stars. Actor Kent Taylor was back onboard playing the evil Dr. Trenton as was midget actor Angelo Rossito (Freaks) as Trenton's evil apprentice Dorro. Wait until you see this little guy act in this film. He's hilariously funny as he terrorizes the evil doctors hostages in the dreary dungeon. When he inserts an IV needle into one of the girls arms and takes some blood from her, it looks like Heinz ketchup dripping into his extracting jar. Also joining them in this new Blood film were Grant Williams (The Incredible Shrinking Man) Reed Hadley (Racket Squad) Vicki Volante (Horror of the Blood Monsters), Regina Carroll (Dracula Vs. Frankenstein, Adamson's real life wife) and Zandor Varkov who played Dracula in Adamson's Dracula Vs Frankenstein is also featured in this film as a devoted follower of Amir.

You'll notice that the organs used in this film were real, and theres some very bloody operation sequences that take place. The blood looks like its from a fresh bucket of red paint (Hey! it IS red paint!) While the storyline is hokey as youd expect from a film of this time and budget, the cast did a great job, acting as sincerely as they could and Director Al Adamson brought a cool edge to the look of the film, utilizing alot of groovy close ups and gore FX. The make up FX were very primitive, it basically looked like the FX crew stuck a wad of chewed up bubble gum or Silly Putty on the actors head and let the chips fall where they would. The film is actually well paced and is perfect to kick back with as you have a few beers and just enjoy the overall campy low budget madness that unfolds in front of your eyes.