This debut film from Writer-Director-Producer Larry Cohen (Black Caesar, It's Alive!, God Told Me To, Q: The Winged Serpent) was originally marketed (falsely) as a Blaxploitation genre film, and soon after when the film didnt attract black audiences it was retitled "Housewife" and re-promoted as a Sexploitation genre film. Cohen even explained to overseas promoters that the film was not a Blaxploitation or a Sexploitation film and it should be marketed as what it was: a black comedy. The foreign marketers then ignored Cohen's requests and went on to promote the film as Dial Rat For Terror, a horror genre picture! Needless to say, Bone never did well in any of the markets and while watching it, its easy to see why. Larry Cohen is a legend to genre film fans. His film work in the 70s and 80s gave us many classic Exploitation films. Cohen was also a very imaginative and experimental director and sometimes when big ideas and interest don't mix, you get films that just can't get through to people. Bone is that kind of movie. 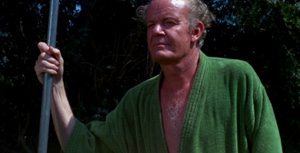 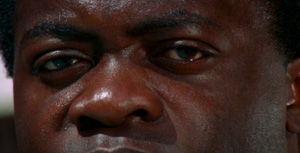 Bone is a film based on dreams. The film doesn't play by the rules whatsoever but instead of being an exciting exercise, it becomes very tedious and boring. The real story of Bone is about the different classes in society most notably between whites and blacks. An upper class Beverly Hills couple Bill (Andrew Duggan) and Bernadette (Joyce Van Patten) are taken hostage by a black man (Yaphet Kotto) the "Bone" of the title. Cohen uses Bone as a metaphor for all the black men that whites are afraid of. Bone taunts Bill and Bernadette and threatens to rape Bernadette if Bill doesnt pay him money. Bone holds Bernadette hostage and lets Bill goto the bank alone to get the cash. While at the bank, Bill meets a young beauty (Jeannie Berlin) and instead of rushing back to save Bernadette, Bill gets a drink with the unnamed girl and they begin to get to know each other better. Meanwhile, Bone and Bernadette are getting to know each other better as well. The film is the standard, "black man teases, taunts and tells his problems to the rich white woman and they end up making love". There is no solid plotline for Bone, its basically one long dream sequence where the characters may be real or may not be. As strange and convaluted as the film is, the acting is great, especially by Yaphet Kotto. You'll have to watch and find out for yourself. This isn't a film I highly recommend, but if you're a big fan of Larry Cohen's work you may want to see this one.

An interesting occurence in the film as pointed out by Larry Cohen on the commentary track is that the ending of Bone is very similar to the end of Bertolucci's Last Tango In Paris. Who knows, maybe ol' Bernardo saw Bone and liked it!