If youve ever watched Mystery Science Theater 3000, you may have seen Boggy Creek II: The Legend Continues. On the show, Tom Servo, Crow and the host make fun of the film and just create an entire separate experience from what's happening on the screen. I actually had a hard time not thinking in MST3K terms while watching it again, so this review may seem a bit MST3K'd. While the film isnt very good in the regular sense, its still watchable and slightly entertaining. When you watch Boggy Creek II, you won't see a lot of great cinematography or acting and the characters are pretty boring. What you will get is a goofy little B-film made in the bottomlands of Arkansas. 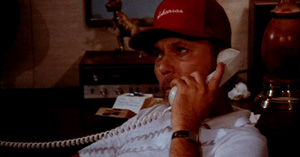 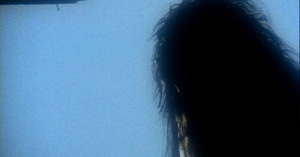 Brian Lockhart (the masterful Charles B. Pierce) is a professor of anthroplogy at the University of Arkansas and while he's at a football game cheering on the home team he gets word from one of his students that the infamous Boggy Creek monster has attacked someone out in the country.

The film is narrated by Lockhart which gives the movie is a semi nature film feel to it and he plays the role as straight as possible. He's not a very good actor, but he does his job and his subtle style is actually pretty funny. The thing about the movie is the story is basically a bunch of people searching for a large sasquatch type creature that lives out in the swamps of "Boggy Creek" around Texarkansas which is in the corner of Texas and Arkansas.

Prof Lockhart gets three of his students: Tim (the excellent Chuck Pierce), Tanya Yazzie (the adorable Serene Hedin) and Leslie Ann Walker (the beautiful Cindy Butler) to help him go look for the creature, but when they arrive at a general store and tell the manager what they're doing there, they get laughed at because the locals dont believe in any Boggy Creek creature. Prof Lockhart is serious about this mission he's on, and as the hillbillies shake their heads and laugh he stays completely calm and tells them that "if he sees some kind of a monkey out there he will shoot it". It's a really funny scene.

They visit a home to see if one of the folks that knows about the creature is home. Suddenly out of the blue, a rabid dog runs out of the brush and Prof Lockhart and the kids are terrified. This is what I call the movie's "Cujo" sequence. Prof Lockhart whips out his .44 Magnum and open fires like he's in the middle of an urban war. Hilarious! They decide to "take cover" inside a house because of this rabid dog. The thing crashes through a window, but they fend him off. Then like every rabid dog is known to do, the thing crawls under the house to try to get inside through a hole in the floor. When Tim opens the door to one of the closets, there the dog is, but instead of jumping on him, he slowly walks forward allowing Tim to get out of the house. Prof Lockhart is left to fend off the dog by himself, only problem is, he wasted all his bullets after missing six times shooting the dog through the floor boards. Now he's in deep dogshit. Prof Lockhart is cornered and it looks like the end, but Tim runs in with a shotgun and blows the dog away. Nice save Tim! Prof Lockhart knows the kids must be shaken up from the encounter with the killer rabid dog, so he lightens up the mood and tells them a story about a fat lady and her fat husband who accidentally crapped himself in an outhouse one day. That Prof Lockhart, he's an old rascal! 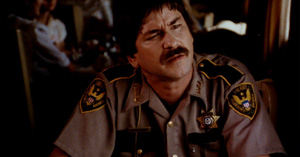 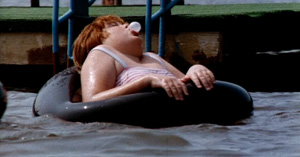 When they arrive in the woods, they camp out and set up a special radar detector that will notify them if the Boggy Creek creature is in the area. They wait, then they see that the creature is headed their way, so in the pitch black night they get out the stun gun and wait to confront it. When the object gets closer, all the lights in the camper go off, which causes the characters to scream and yell like little kids. Prof Lockhart takes charge and tells them to "shut up!". They calm down a bit and when they go outside they get the lights back on, and the creature shows up. It's so hard to see the thing, you just hear some growling and then Prof Lockhart shoots it with his dart gun. All you see is the dart hit something black. The cinematography is really terrible in these nighttime scenes.

Prof Lockhart meets with the police officer, Deputy Williams (played by the one and only Rick "Rock" Hildreth) that was attacked by the Boggy Creek monster's child at his home. He explains that after he came home from fishing, the monster was there and that he must've smelled the fish. The police officer lets him know that he had to get several stitches because of the attack and Prof Lockhart kind of giggles at that. Seems like he figured this creature would be more ferocious. The police officer gives Prof Lockhart a tip. He tells him to go see this guy named Old Man Crenshaw, a hermit who lives alone out in the wildnerness that knows all about the creature. Prof Lockhart and the kids load up a boat and start off down to the home of Old Man Crenshaw. 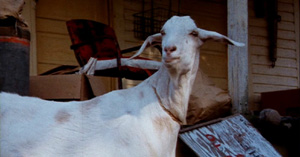 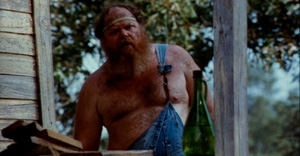 They arrive at a shackhouse at the bottom of the river and they are met by this huge fat hillbilly who looks like he hasn't bathed in a year. Old Man Crenshaw (acting legend Jimmy Clem) is his name and stinking up the film is his game. This guy is a bundle of fun, all he does is mumble and talk gibberish to Prof Lockhart and the kids. Then he offers Tanya some tobacco or swamp gum. She chews it a little, then gets sick from it. This makes Old Man Crenshaw laugh. He mumbles "them city girls get my goat"...or something. After the exciting conversation, it looks like its going to start raining hard, so Prof Lockhart and the kids decide they need to get back upriver, but Crenshaw tells them to stay so they are safe. While the kids talk, Crenshaw tells Prof Lockhart he needs to speak to him alone. He brings him into the next room, (uh oh is it Deliverance time?), opens up a closet door and shows Prof Lockhart something. It's the Boggy Creek monster's child or a large black spot that we cant see. Prof Lockhart is in shock and gets angry at Crenshaw because he sees the creature is sick. Now he knows why the mother or father was so out of sorts back at the camp! Crenshaw mumbles n grumbles saying something to the effect that "this is why he wanted to show him the creature, because he knows he's a doctor who could help it!". They pick up the creature/black object and carry it out into the living room, but all of a sudden, the Boggy Creek creature shows up and smashes the door. Prof Lockhart tries to explain to the creature, they just want to help, and somehow the creature recognizes they arent trying to hurt his child. Prof Lockhart moves closer and places the child gently into the creatures arms and it turns and runs away. Old Man Crenshaw doesnt feel the "peaceful vibe" so he gets out his shotgun and gets ready to shoot, but he can't because Lockhart has taken the shells out of the gun. RATS! OLD MAN CRENSHAW FOILED AGAIN!

After they see that the creature isnt hurting anyone, but is in fact just trying to survive in the wilderness, Prof Lockhart and the kids decide to leave and let the thing be. As the sun rises over the bottomlands, they paddle off in the canoe back up river leaving the legend of the Boggy Creek creature where they found it. THE END.

Boggy Creek II: The Legend Continues is not a very good film or a film I highly recommend to movie lovers. Its a 1980s C-film that is mildly amusing and the kind you'd see on MST3K being poked fun at because of its bad acting and hilarious storyline. You may want to skip this one, or if you have nothing else to watch, you could throw it in the DVD player, have a few beers and laugh at it along with your friends.