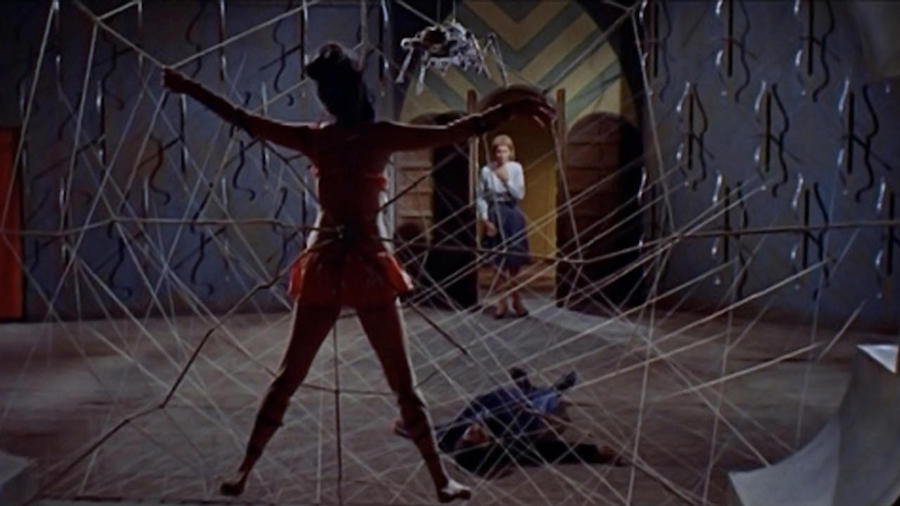 I could never get into the torture porn subgenre. I don't know why people love to see hot chicks being tortured by someone, but here's a very early version of that subgenre I watched today. It's called "Bloody Pit of Horror". Although this film has NONE of the nudity it still has the torture, sexy women, and a weird cult. Another thing that made me worried before this film is, guess what? It's in the public domain! Since other PD movies I reviewed like Monstroid (yuck!) or The Legend of Boggy Creek resulted in a TOTALLY opposite reaction from me. I had no idea about what I should expect at all.

Luckily, this film falls into the "campy" category. The plot is about a group of people who go to an "abandoned" castle to shoot sexy photos (How sexy you may ask? I'll tell you later) but then they find out that Travis, a former actor, still lives there. Everything seems fine until an evil spirit possesses Travis and he kills/tortures lots of victims as a punishment....but punishment for what? Okay, we have our first plot problem here. I don't know if I fell asleep while I watched this film or not, but these people are just walking around the house and shooting photos. That's it. Although there are two people who decide to make love in the basement of the castle (I mean, really? You stay in a castle and you can't find a better place to have sex?) and get killed, there's no legitimate reason to kill or torture people in this film, according to the behavior that we see.

Next, we have the weirdest place to shoot photos ever: in an abandoned castle! I guess they want to shoot photos for some fashion magazine or a horror novel cover, but it would be easier and safer to shoot photos in a studio. Plus, the poses that these sexy models are making are laughable and stupid. For instance, there's a model who poses as if she was strangled by a suit of armor. What about torture scenes? Well, the highlight happens in the very last portions of the film and it has two memorable scenes. First, there's a woman who is captured by a spider. What makes it so funny is the fact that the spider is fake with robotic arms and legs. The web is obviously just made of rope, and the trap prevents anybody from rescuing her (which is a set of spider webs that will trigger a spear into young woman if something touches it). The hilarious part occurs when our main protagonist decides to help the woman, but, oops!, he doesn't take off his sweater jacket. So, while he's struggling with the buttons that might get caught on the net, the victim is really scared of spiders...so scared that she passes out because of it.

But wait, there's more! The climactic scene is when Travis captures the remaining men and wome and puts them in his dungeon. It has lots of weird torture equipment like...I don't know how to explain this, but I'll try. He puts two women onto a spinning board of wood while he pushes sabers towards their bodies. There's a point when a saber tears apart the woman's bra. Wow! It sounds sexy, right? WRONG! The two chick's faces are extremely unconvincing. These actors performed horribly in the torture scenes. Also, there's a scene in which a woman is being tortured and screaming. The thing that makes it funny is the fact that her mouth is shut the whole time and its dubbed.

Overall, this adaptation of Marquis de Sade's writings is pretty fun. There are more unintentional comedic moments that will make you laugh for sure. Like the Batman TV show style fight scene or one that shows a guy who is shot with a spear driving a car in a circle, or a scene that shows two guys discovering the body of a victim inside an iron maiden and saying "Well, that could have been an accident". It's one of those things you have to see to believe.