Blood Beach riffs on Jaws 2 with the catchy tag-line, “Just when you thought it was safe to go back in the water, you can’t get to it” smartly identifying itself with the hugely successful movie franchise. Advertising posters feature great artwork of a gal being pulled into a pit in the sand, advertising effectively catching movie-goers attention.

After people are sucked into the beach by a mysterious “what,” police procedural and a romance sub-plot push creature attacks into the background while police argue with local community leaders, characters have loving conversation over candle-lit dinners, and the cast get together for a couple of band numbers at the local watering hole; a tiresome method of “musical time-killing” forever used by low-budget film-makers seeking to expand thin running times.

Jeffrey Bloom directed episodes of Starsky and Hutch and wrote/directed Dogpound Shuffle with David Soul prior to directing Blood Beach. Bloom returned to television for several TV movies after completing Blood Beach, which itself could easily be mistaken for a prime-time cop drama with a creeping sand-monster replacing trouble-making criminals. Movies that “look like TV” is admittedly a hard to define comparison although most everyone, borrowing from that famous quote about pornography, “knows it when they see it.” 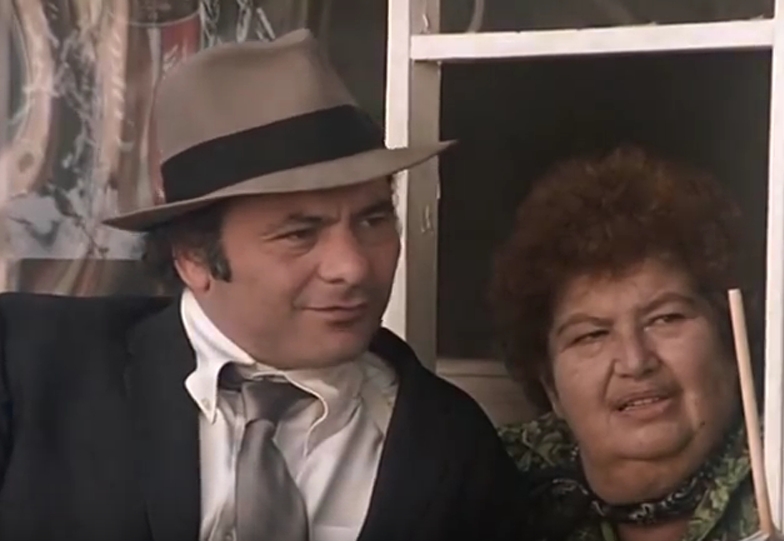 Young has several memorable scenes, one particularly humorous exchange showcasing his ability to effortlessly portray subtle behaviors that reveal his character’s veiled, yet true feelings. While a missing victim’s wife describes the ridiculous outfit he was wearing the day he disappeared, Young politely takes notes, carefully repeating each garment of clothing; shorts and knee-high socks, odd styles, patterns and colors capped-off by an aqua-marine t-shirt reading “Need gas? East beans” in bright red lettering (a nod to the then-current US oil crisis). By simply repeating each item of clothing to the bereaved wife, Young perfectly conveys Royko thinking to himself that he‘d never be caught dead in such a ridiculous outfit in public.

Holding the reins on Royko are police Lieutenant Piantadosi (Otis Young) and hard-nosed Captain Pearson (Saxon). Saxon has a great face, easily conveying the force of authority before speaking a word of dialogue. Stefan Gierasch (Starsky and Hutch, Baretta) tags along as the pre-requisit scientist, Dr. Dimitrios, although the investigation abandons scientific theory for lots of head-scratching and digging after the creature with a back hoe.

Unforgettable character actor Micky Fox appears as the owner of local greasy-spoon Moose’s Galley; Marianna Hill appears as Catherine, daughter of the first victim and love interest for local beach policeman, Harry (David Huffman). After more attacks, Captain Pearson turns to Harry asking, “What’d I do to deserve this?” oddly appropriate dialogue for an actor stuck with this TV-cop-monster-movie hybrid, who spent a long career working with several noted directors such as Otto Preminger and acting alongside Jane Fonda in the Oscar-nominated The Electric Horseman. As dialogue between Pearson and Harry continues, Saxon jokingly tosses out the purloined Jaws 2 advertising slogan to wrap up their conversation. Someone really liked that advertising tag-line!

Harry eventually surmises that the old abandoned amusement building sitting pier-side would make a perfect monster home. These suspicions are confirmed during one of the most effective sequences in the movie. While poking around inside the abandoned building, Catherine has various body parts fall on top of her from the creaky ceiling above, and finds herself staring at her mother’s (very well sculpted) disembodied head swinging by its hair just inches from her face!

Shortly after Catherine’s grisly discovery, an unlikely camaraderie between Royko and Captain Pearson comes to light after Piantadosi asks what Pearson wants to do next. While men remove body parts in plastic trash bags, Royko asks “What the hell kinda question is that? We blow dis thing to kingdom come, that’s how ya handle monsters!” Pearson, subtly agreeing with Royko without having to directly acknowledge his suggestion, tells Piantadosi, “I want this place wired……I want to be able to push one plunger…… that’ll blow the hell outta ANYTHING that’s down here.” 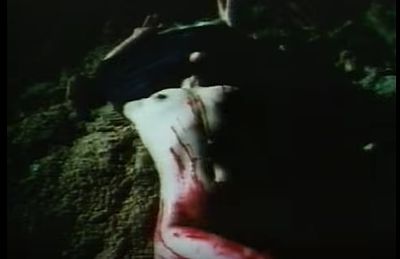 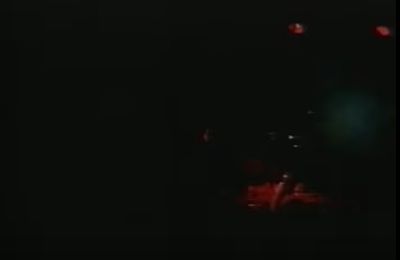 Captain Pearson orders a stake-out, monitoring the building and pier with infra-red cameras during a long evening jammed with curious onlookers and media reporters that creates a morbid carnival-like atmosphere as people wait for the creature to make its appearance. Finally, the creature reveals itself during a disappointing sequence unveiling a strange sack-like creature with a long stem rising from its center, the stem topped by a venus fly-trap mouth ringed by sharp teeth – a giant killer barnacle? More plant-like in appearance than animal, the monster fails to meet expectations of some sort of blood-thirsty ocean predator, demonstrating little evidence of being able to swiftly maneuver itself – a necessary attribute for living as a stalking predator burrowing beneath sandy beaches and striking quickly at its victims. Jeffrey Bloom explained that the creature was indeed disappointing when presented by the effects crew, but there wasn’t time to make any improvements to the star of the show.

Royko decides he’s seen enough after glimpsing the creature gnashing its teeth at the police monitors and sends the entire pier into an exploding fireball after stepping on the explosives’ plunger.

There was never a sequel, and apparently distributors/exhibitors felt that the relatively tame film could use some “spicing up.” At some point, someone spliced their own home-made monster scenes into the movie during two attack sequences to provide a little more monster! A girl buried in the sand by her friends suddenly starts screaming that something is biting her, and they manage to pull her bloodied body from the sand. Originally, not much of the attack is shown aside from the aftermath of blood smeared across the girls’ legs once freed from the sand. However, newly added monster footage includes a bloody green “finger” armed with a sharp white fingernail breaking onto the surface of the sand from between the girls’ legs. As beach goers help the girl out of the sand, another quick shot shows a green bloodied claw splayed across the top of her thigh. 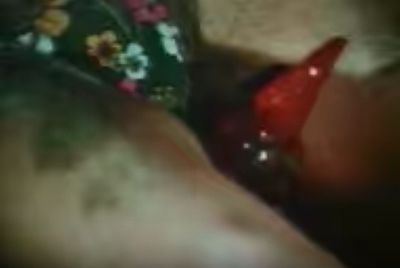 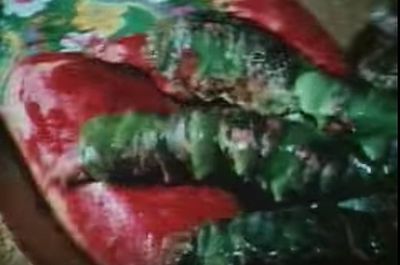 Another inserted scene involves the character chasing her hat across the beach. After being sucked into the sand, additional footage shows a naked woman lying on her back, with her clothing pulled strategically around her head to effectively hide the fact that this is an entirely different actress. Luminous red eyes accent a quickly revealed latex creature head resembling a rabid dog shown attacking the torso of its victim during a quick cut – the entire lengthened sequence lasts seven seconds.

Fleeting glimpses of a green creature add nothing to the movie, and was hardly worth the effort. Director Jeff Bloom hadn’t been aware of the additional footage when asked about it; who created it, whether or not the additional scenes appeared theatrically, or if the additions were unique to particular home video releases remains a mystery.

Blood Beach doesn’t contain enough of the horrific to be remembered by fans of the genre although it stakes a claim in the history of fantastic cinema for allying itself so closely with the boffo box office success of Jaws; contributing to the trend of beach creatures seizing movie screens during the early eighties by terrorizing a sea-side community before it can even reach the ocean. Blood Beach’s lackluster story line is aided immensely by the handful of capable actors turning in noteworthy performances. Casting is spot-on, and Burt Young shines brightest, making a good argument for re-naming the movie “Royko versus the Sand Creature.”