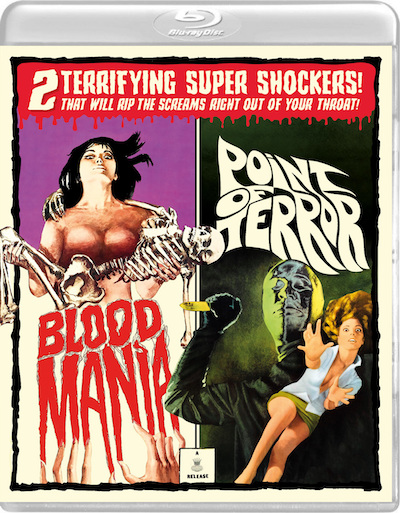 Blood Mania: Young doctor Craig Cooper is assistant to Ridgeley Waterman, head of a Los Angeles hospital. Until the elder man's stroke which keeps him confined to his residence, Cooper has managed to shake off the advances of Victoria, Waterman's daughter.

Larry, a friend of Cooper's from college days, blackmails the young medic, threatening exposure of the abortions he performed during his internship. Cheryl, Cooper's longtime amour, plans to try to make a deal with the blackmailer.

Victoria, sensing something is wrong, offers to help Cooper, getting the $50,000 he needs. He submits to her offer, and to an affair, not realizing the intensity of her desire for him, nor the dementia towards which she is slipping. The last 15 minutes of Blood Mania are so unexpected, so much of a shocker, you can't miss it!

Point of Terror: Lounge singer Tony Trelos (Peter Carpenter, Blood Mania, Vixen!) spends his evenings performing at the Lobster House, waiting for his big' break to crack the Billboard's Top 10. He has a chance meeting with the beautiful older Andrea (Dyanne Thorne, Ilsa She Wolf Of The SS, Ilsa Harem Keeper Of The Oil Shieks) who happens to be the wife of a powerful record producer. She takes Tony under her wings, offering him opportunities and success in his singing career. However, things take a deadly turn as Tony is soon enveloped in a twisted web of murder and adultery. Sometimes it just doesn't pay to get what you wish for! Featuring Carpenter singing his big hits "This Is...", "Lifebeat", and "Drifter of the Heart", Point Of Terror is an exercise in suspense in which there may be no escape!