The movie opens with a narrator (and humble co-director, Brad Grinter) talking directly to the camera (We're already off to a good start, right?) giving us the definition of a catalyst....Okay. Then we spring into the movie with the introduction of our biker hero/protoganist/lead guy, Herschell played by Steve Hawkes (who receives a starring credit not once, but twice!)

Hersch (Who resembles both Elvis and Wolverine with a burnt left arm to boot!) runs into a cutie whose car has broken down off the highway. With no dialogue available, we take it that the gal (Angel's her name) convinces Hersch to join her at a party that her sister's attending. To make things short, we got a good sister, Angel, the bible-preaching goodie-two-shoes and Ann, who's the exact opposite, Sex, Drugs & Rock 'n' Roll! But in the end, it's Ann who ends up tracking and baiting Hersch for the kill. While Hersch was reluctant to join in on the weed-smoking party in the previous scene, now all of a sudden, he can't get enough of both the reefer and Ann!

Well, since it looks like Hersch is gonna stay in town, he might as well find a job. Enter the turkey ranch! But this is no ordinary turkey ranch! Hersch is soon introduced to two scientists (my favorite guys of the whole movie) who encourage Hersch to be a guinea pig to eat their chemically-induced, cooked turkeys! Oh, and a bonus supply of marijuana too! Can't say no to that! 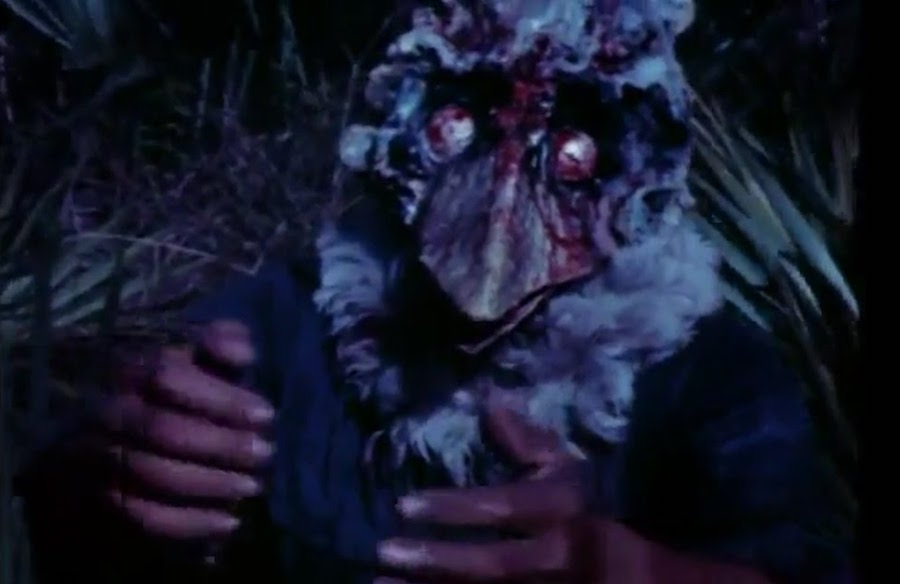 So what happens to you when you eat an experimental turkey to go along with your drug addiction? That's right! You become a maniacal, bloodthirsty Turkey-Man! Complete with a plaster turkey head!

Alright, after that, the movie just becomes "Gobble, Gobble" *SCREAM! SCREAM!* "Gobble, Gobble" *SCREAM! SCREAM!* But boy, if it isn't a blast. It's got all the production value of Manos: The Hands of Fate and all the originality of....God knows what! But what makes it most appealing is that this was all meant to be taken seriously. You've got the Christian theme with Angel (Which comes back to try to save the day in the end) and our narrator's frequent interruptions telling the audience what's wrong with the world today (via script that he often looks down and reads from!)

And it all just did NOT work. Both in filmmaking terms, "acting", and in the story, the result ends up being a hilarious twisted joke that you'll never forget.

Believe me, it's an unbelievable 90 minutes of your life. And even though the film's "twist" in the end might not be satisfactory to some, just check out the final segment when we last see the narrator. What he says and what happens to him is a brilliant exclamation point to one of the greatest treasures in film history (yes, you read that right).