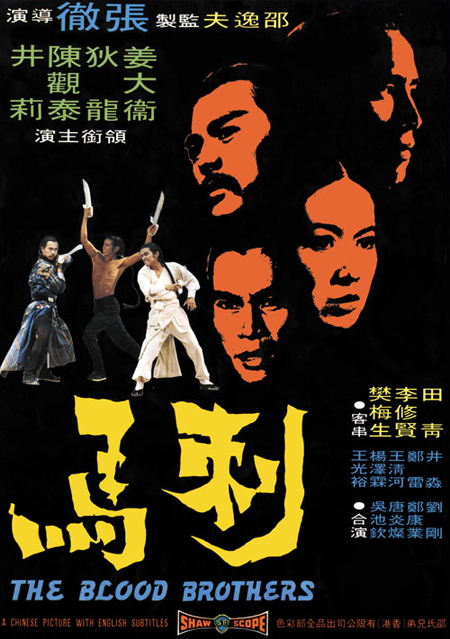 Blood Brothers is a 1973 Shaw Brothers kung fu film directed by Chang Cheh, with action choreography by Lau Kar Leung, and starring David Chiang and Ti Lung. It was released as Chinese Vengeance in the UK and Australia, and Dynasty of Blood in North America. The films is a fictional story based on the assassination of Ma Xinyi. Blood Brothers follows two aimless bandits Chang Wen Hsiang (David Chiang) and Huang Chang (Chen Kuan-tai) who attempt to rob Ma Xinyi (Ti Lung). Unable to defeat him, they join forces and are soon thrashing hoodlums and even taking over a nearby group of bandits. But soon it becomes apparent Ma's ambitions far out reach those of his friends, he seeks a position in local government. Having left them behind they meet again. Now a general, Ma still in not about to let anything stand in the way of his goals - which now include defeating the 'long hair' bandits and Huang's wife Mi Lan (Ching Li). The attraction is mutual, with her seeing potential of this ambitious man. Whilst Chang and Huang are off fighting the bandits Ma and Mi have an affair and he arranges for Huang to be assassinated rather than let his position fall into disgrace. As Chang recounts his tale to the local Marshall, held for the murder of his blood brother, the inevitability of his fate is always clear. After Ma's men take their revenge, Mi Lan is left to recall over the good times and all the trouble she's caused. (Wikipedia)