Blastfighter (God that title is amazing) is the story of Tiger, a former Atlanta cop whose wife is savagely murdered. When Tiger tracks down his wife’s killer, he realizes that he won’t be able to obtain a conviction because the man is too well connected. So he does the next best thing: put a tangerine-sized hole in oldboy’s face. Hooray! So he spends the next eight years in prison. Upon his release an old cop buddy gives him a little present in the form of the biggest fuck off shotgun I have ever seen. This badboy fires everything; armor-piercing rounds, grenades, smoke bombs, shrapnel, wolverines, swarms of bees, herpes, cabbage….the works. But when given the chance to take out the scumbag lawyer who protected his wife’s killer and put him away, he can’t bring himself to pull the trigger. He retreats to his home town in backwoods Virginia. What follows is a series of conflicts wit the townies who are none to pleased to see their disgraced resident.

So yeah, that’s the plot. The beginning of the movie really struck me as atypical for this genre. There were no burnt out buildings, no bad narration explaining how the world f’ed itself in the A, no rogue gangs of bikers sporting headbands, and no FRED WILLIAMSON??!!! There is nothing about the opening of this film that suggests it’s an Italian Knockoff Film; aside from the Super Mario moustaches and the sweet, sweet syntho-score. In reality, this film purposely hides the fact that it was made by Italians. Think I’m kidding? All the Italian actors’ names are changed to more American-sounding ones (Luigi Montefiori became George Eastman). Even director Lamberto Bava is credited as John Old, Jr. This bothered me a bit because it seemed like they were trying to trick people into seeing this under false pretenses…..until I remembered every other movie in this subgenre does exactly the same thing. Actually I was a little put off by Bava having to change his name because he is one of my favorite cheesy directors and I thought he deserved credit; being the mastermind behind Demons and Demons 2.

The plot was very, very strange. It moved slowly at first and wasn’t so forthcoming with information. I had to wait until the halfway point to put all the pieces together which was decidedly perplexing. The first real conflict is between Tiger and a group of hillbilly hunters who are letting the deer they shoot suffer instead of killing them outright. They made such a huge deal out of this that I thought this film was going to be about hunting reform (well hell, I mean that’s all I had to go on isn’t it?). But then some girl shows up in Tigers cabin and starts cleaning and bossing him around; forcing him to sleep outside. She never introduces herself so Tiger, and the baffled audience, have no fraking idea who she is. Turns out to be his daughter which is weird because they look to be about the same age. So the story drags a lot and isn’t very user friendly until that point. There is also some weird backstory between Tiger and “George Eastman’s” character that is never fully explained. 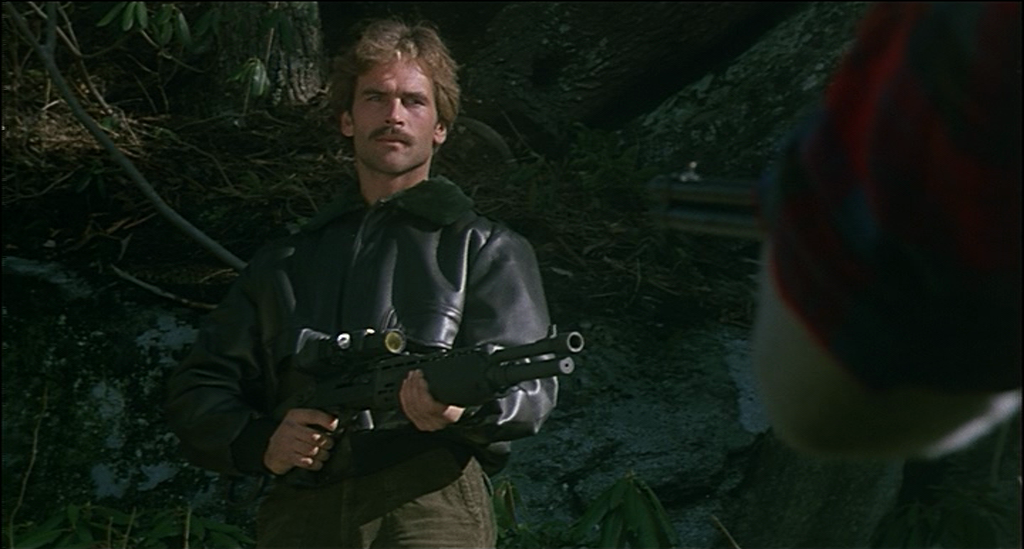 If you are a regular movie watcher you would have turned it off halfway through (more likely you would not have bothered searching for or purchasing it in the first place). Even as rabid film geek, I have to say I thought about doing the exact same thing. But then suddenly the movie turned on itself and exploded. Actually it started with several pickup trucks exploding in rapid succession. Suddenly this movie was, well it was still bad but, super fun bad. Then it occurred to me what I was actually seeing. This was totally an IKF but it was knocking off a totally different type of film. This was Lamberto Bava trying to make First Blood with a dash of Walking Tall. He makes a movie about a man pushed too far by locals who goes insane and kills them one by one, using the terrain to exact his revenge. Sound familiar? I honestly expected Tiger to have a long-winded, unintelligible soliloquy about Vietnam and whose war it really was.

Michael Sopkiw (Tiger, and also the star of 2019: After The Fall of New York) is fairly badass at the end of this. He is really not taking crap from anyone. Although I thought he could have taken to using his gun a lot sooner given the big deal made about it (and the fact that the fucking movie is called Blastfighter!). There were some low budget but nonetheless entertaining effects in the big firefights. I think my favorite was when not one but two townies get blown apart at the waist; yeah, that had me rolling. And actually the scene where he sets his daughter’s broken leg was realistic enough to make me cringe so way to go Blastfighter!

Though it started with little promise, this film really highlights what I love about Italian Knockoff Films. Sure, they are basically a marketing ploy used to dupe American audiences. But I also see them as fan films. These are guys that love movies like First Blood, Escape From New York, and The Road Warrior and set out to make their own version. It may be giving these filmmakers too much credit but I want to believe that they are movie geeks just like us….so I do! Besides, if imitation is the sincerest form of flattery, then downright plagiarism has to be an exponentially higher level of love. Right?