Former Italian cinematographer Mario Bava (Hercules, 1959) made his feature directorial debut (at age 46) with The Mask of Satan (a.k.a Black Sunday). The atmospheric, black and white film stirred up some controversy due to some disturbingly violent content (for the time) and made an international star of lead actress Barbara Steele (8 1/2 (1963), Castle of Blood (1964), Caged Heat (1974), Shivers (1975). It also marked the beginning of a multi-picture deal between Bava and American International Pictures who would release several of Bava's subsequent films usually in altered and censored forms. Beginning in the late 1960s, Bava's The Mask of Satan/Black Sunday has often been cited by film critics and historians as an example of an influential effective horror film of lasting artistic value. (1). 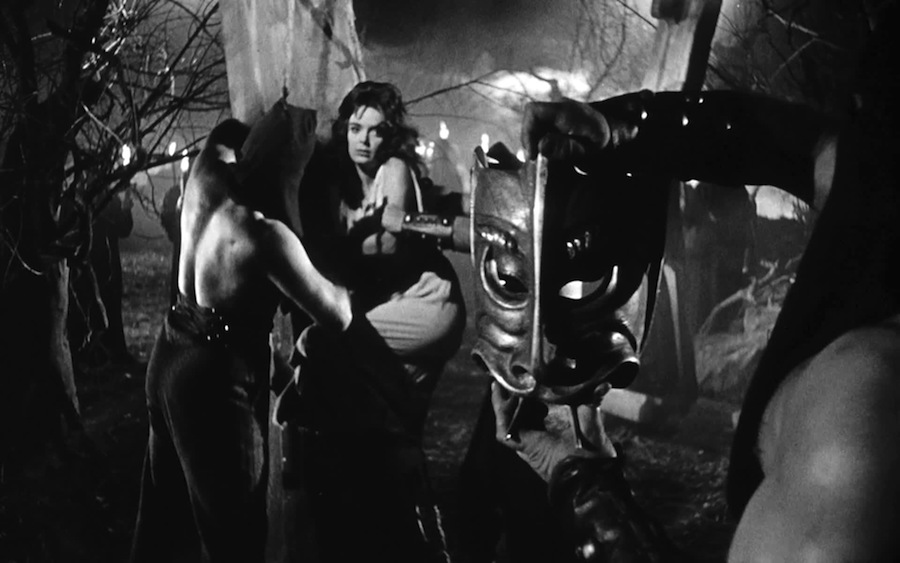 Mario Bava was born on July 31st, 1914 in San Remo, Italy (he died in 1980), and studied to be a painter before becoming an apprentice for his father Eugenia Bava who (after working many years as a set designer and photographer for Pathé Frères) had become the director of optical effects at the newly-formed Istituto LUCE in 1926. After subtitling films and creating title and credit sequences for several films, Mario worked as an assistant to some of Italy's finest cinematographers and became a director of photography in 1939. (2) He shot films for directors Roberto Rossellini, G.W. Pabst, Raoul Walsh, Robert Z Leonard and "his stylized lensing was critical in developing the screen personas of such international stars as Gina Lollobrigida and Steve Reeves." (3)

Mario was a very modest man who kept a pretty low profile. (4) Throughout the 1950s he often moved from cinematographer to 'ghost' director to complete and 'save' films for various producers after the original directors had abandoned the project following disputes (1956's I Vampiri/The Devil's Commandment, 1957's Le Fastiche di Ercole/Hercules and 1958's Hercules Unchained, for example). Finally, after completing the films Caltiki: The Immortal Monster and Giants of Marathon in 1959, Bava was rewarded for his efforts by getting the opportunity to develop, write and direct a film of his choosing. (5) 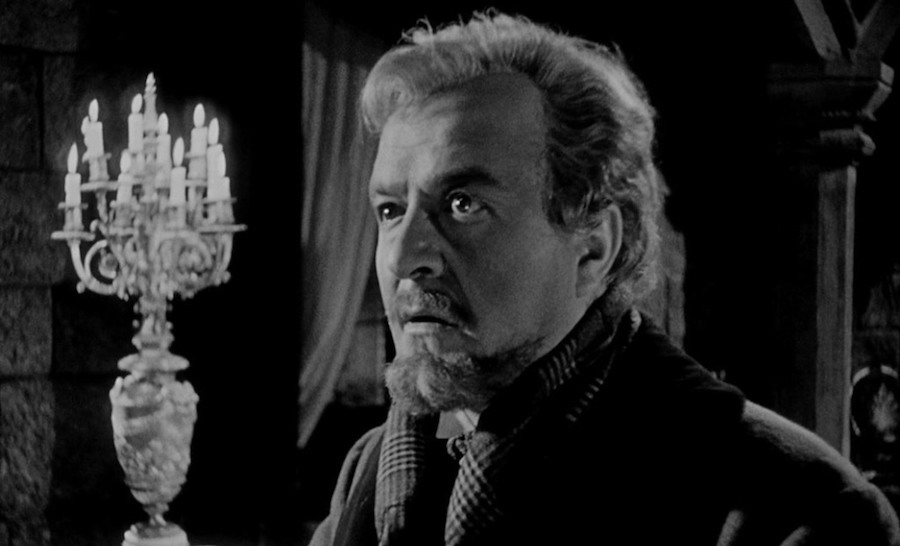 Bava chose to adapt the short story "Vij" by one of his favorite Russian authors, Nikolai Gogol, into an homage to the early Universal horror films (Dracula (1931), Frankenstein (1931) and Bride Of Frankenstein (1935) he had long admired. The film's original title La Maschera Del Demonio was a play on the Italian release title of Hammer's The Curse of Frankenstein aka La Maschera di Frankenstein (1957) which had been a box-office sensation a couple of years earlier. The modestly budgeted film was shot at the Cinecittà Studios in Rome. Bava prepared an English version of the film originally titled The Mask of Satan, for Samuel Z. Arkoff and James Nicholson's A.I.P. in 1960. Arkoff trimmed off a few gore shots to appease the Los Angeles MPAA board, commissioned a new score for the film from Les Baxter and re-titled the film Black Sunday (it was now almost 4 minutes shorter), before releasing it in the U.S. in 1961. The British board of censors refused to certify the AIP version of the film (responding to the public backlash against violent films such as 1959's The Stranglers of Bombay and Michael Powell's Peeping Tom in 1960) which meant Black Sunday could not be shown in any licensed movie theater within the United Kingdom. (Several years later, in 1968, a more censored version of the film was officially released with the title Revenge of the Vampire in the U.K.). (6)

The Mask of Satan (Black Sunday) boasts several memorable sequences which display a distinctive style and approach to the horror film. Bava pushed atmosphere, mood, dark themes and sometimes gore ahead of story and characterization in most of his films. Italian genre directors following Bava such as Dario Argento (Deep Red (1975), Suspiria (1977) and Lucio Fulci's (Don't Torture A Duckling (1972), The Beyond (1981) would do likewise. 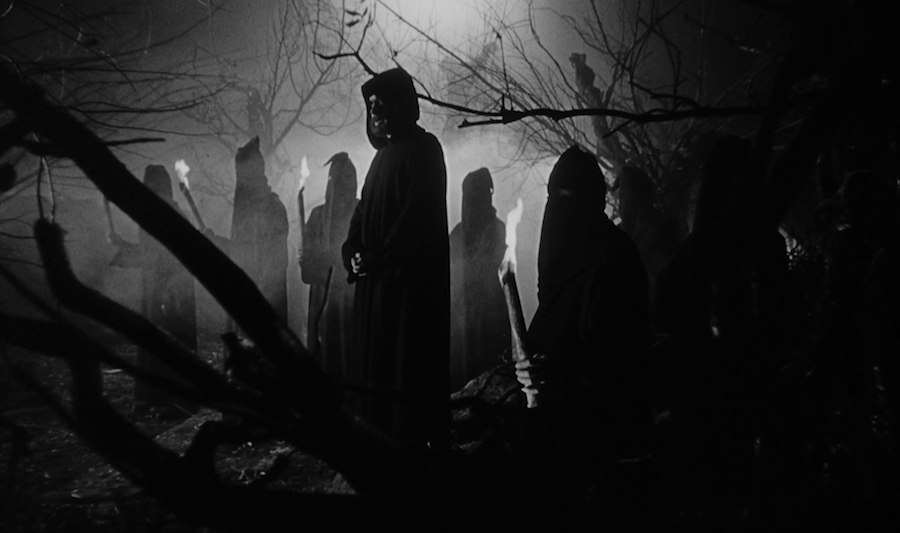 During the film's still effectively shocking prologue, Princess Asa Vajda (Barbara Steele) has been condemned to die by her brother, the grand inquisitor, for witchcraft along with her co-conspirator and lover Javutich (Arturo Dominici) in the seventeenth century. She has been tied to a stake and curses her accusers before a spiked brass mask is hammered onto her face. When the villagers attempt to complete the execution by burning her body a torrential rain storm prevents them from succeeding and the superstitious villagers leave.

Two centuries later, two doctors, Adrej Gorobe (John Richardson) and Tomas Kruvajan (Andrea Checci), on their way to a convention, stop at an old castle. They discover an old crypt that is housing the sarcophagus of Asa, the witch. Accidentally and unknowingly they bring her back to life and Asa begins her revenge on the descendants of those who killed her by reviving Javutich from his grave. The two turn others into vampires for their mission while slowly moving in on Katia Vajda (also played by Steele), the last member of the family.

Bava immediately establishes an old fashioned gothic atmosphere with gnarled tree branches, swirling mists and fog, and later a decaying castle, a dark foreboding crypt, and more. The brief splashes of gore and somewhat dated but stylishly shot effects are still effective enough to make an impression on modern audiences. For example, there are scenes where: Javutich digs himself out of his grave; a seemingly possessed carriage glides through the forest in the moonlight; a hypnotized victim kisses a corpse; a face on fire is shown in close-up; an eye is gouged shocking to theater audiences in the early '60s. Another memorable sequence is the resuscitation of Asa after we watch her rotting corpse grow new skin and new eyes, instead of merely having her rise out of her crypt Bava suggests there is so much energy being created that her stone crypt cracks and almost seems to explode into dust as she transforms back into a living creature.

Bava returns in almost every one of his films whether they are horror, mysteries, science fiction, westerns or comedies to a couple of basic themes involving the deceptive nature of appearances and the often surprising and shockingly destructive capabilities of human nature. In many of his films, (including: Black Sabbath (1963), Kill Baby Kill (1966), and Lisa and The Devil (1972) a family tears itself apart because of the deception of one of its members. In The Mask of Satan, a brother sentences his sister to a horrible death and his descendants are cursed for eternity as a result. Many of Bava's latter films are disjointed exercises in style lacking sympathetic characters, and happy endings. 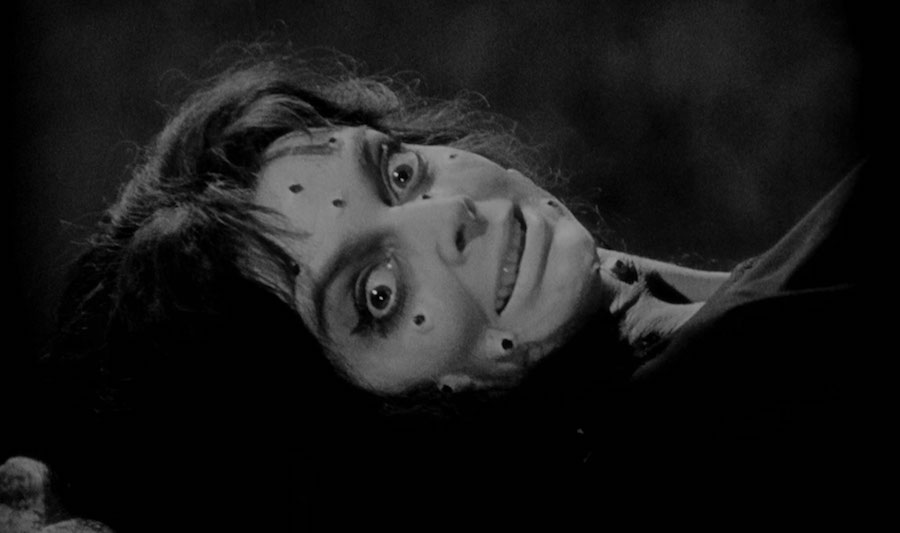 Bava made several films that were key influences on newer genres such as the Giallo or Italian mystery films (The Girl Who Knew Too Much (1962), Blood and Black Lace/Six Women for the Murderer (1964), and American slasher films (Bay of Blood/Twitch Of The Death Nerve (1971) which directly influenced the Friday The 13th film series. Several U.S. filmmakers (such as Martin Scorsese, Tim Burton, Quentin Tarantino, David Lynch, John Carpenter and others) have publicly acknowledged Bava's innovative stylish camera-work, and use of light and color as influences on their works. He composed shots with a painter's eye, and experimented with light and later color in unique ways. The Mask of Satan aka Black Sunday established Mario Bava as a respected film director and Barbara Steele as a lead ingénue. (7)