After making several popular Kung Fu films for Warner Brothers (Black Belt Jones, Hot Potato) following the death of Bruce Lee, Jim Kelly continued working in action films for smaller film distributors in the 70s. In 1976, he made the actioner Black Samurai with an unusual choice for director: Al Adamson. Adamson wasn't particularly known for being an action director or even a martial arts director, he was known for making schlocky Grindhouse horror films like Dracula Vs. Frankenstein and Beast of Blood. 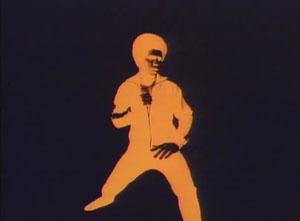 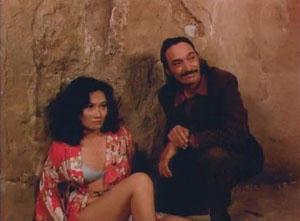 The daughter of a Japanese minister who holds power in Asia is kidnapped by some thugs who track her to a house and then kill her bodyguards. Meanwhile in Mexico, we meet Robert Sand (Jim Kelly) an agent for a special government ops group called DRAGON. He is currently on vacation, but his good time is spoiled when two fellow agents show up with some important news for him. They need him to take on a new assignment. Sand turns them down and tells them flat out nothing is going to ruin his good time. The agents then tell him they have some info that may change his mind: the girl who has been kidnapped is Toki, Sand's girlfriend. The man they think has her is Mr. Janicot, a well known underworld figure that has a penchant for witchcraft. When Sand hears this he has to go and find Toki. He hops the first plane back to LA where he picks up his purple Ferrari and begins driving to his apartment. On the way, two thugs in a white car spot him and follow behind. Sand takes a side road and when the thugs try to shoot him, they miss and shoot their own tire out causing them to fly into a ditch after which the car crashes and explodes.

Sand arrives at his apartment where he begins to practice his samurai and kung fu skills. What happens next is one of the funniest scenes in the film. As Sand meditates, a midget pops up out of nowhere and puts a shotgun to his head point blank. Another thug is with him to help. The midget tells Sand not to move or else. Sand grabs the gun in super slow mo and shoots the other thug. He takes them both out. Suddenly one of his fellow agents shows up a split second later and gives him an invitation to a party being held by Janicot. Sand arrives at the shindig in a bright red jumpsuit and meets a young black beauty named "Synne". Synne is one of Janoicot's mistresses and she introduces Sand to Janicot himself. After a brief exchange, Sand insults Janicot and the fight is on. Janicot sends his thugs after Sand, but he fends them off using his super martial arts/samurai skills. 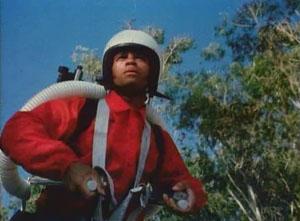 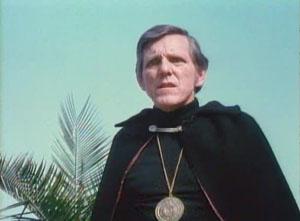 Now that Sand knows where Toki is being held by Janicot, the rest of the film is basically how he tries to get her back. We get one bad acting scene after another then a sequence that comes out of nowhere when Sand uses a special jet pack to infiltrate another area where Toki is said to be held. This is actually really cool and I'm not sure how they did it (helicopter?), but it sure looked real when Sand is flying around in the air. Remember this isnt CGI, its live action. Sand finally lands but doesnt find Toki anywhere. Another killer midget shows up and Sand takes him out pretty fast after a quick exchange of words.

Director Al Adamson brought his own style to the kung fu genre with this film which you will surely see in the whole witchcraft and killer midget themes running throughout. Jim Kelly makes the film watchable because he plays the character relatively serious with shades of his own unique brand of "show off" humor (see Williams in Enter The Dragon). Is Black Samurai a cinema classic? No, but it is a good low budget Grindhouse film that will have you laughing out loud from the bad acting/midgets and excited by the exceptional martial arts action from Jim Kelly.