Two of the area's most wanted female inmates, Revolutionary Karen (Margaret Markov) and prostitute Lee (Pam Grier) are on their way to being transferred to a maximum security prison. Karen's hombres, the local revolutionaries, suddenly attack the transport in hopes of freeing Karen. Instead she runs off (chained together with Lee) in the opposite direction from her comrades. What I didn't tell you before was that Karen and Lee had a serious disliking for each other in the jailhouse that they were previously held in. And now they're on the run with no absolute separation between the two? Let the drama begin. Meanwhile, A cop named Cruz (Eddie Garcia), who flirts with both sides of the law, offers a cowboy bounter hunter, Ruben (Sid Haig) a reward in trying to track the girls down. And not only are the local authorities involved with the hunt, but Pimp/Drug lord Vic (Vic Diaz) is also after Lee because "She knows too much". Enough to perhaps bring Vic down for good. It all boils down to a showdown between revolutionaries and gangsters---With the chain finally broken off. 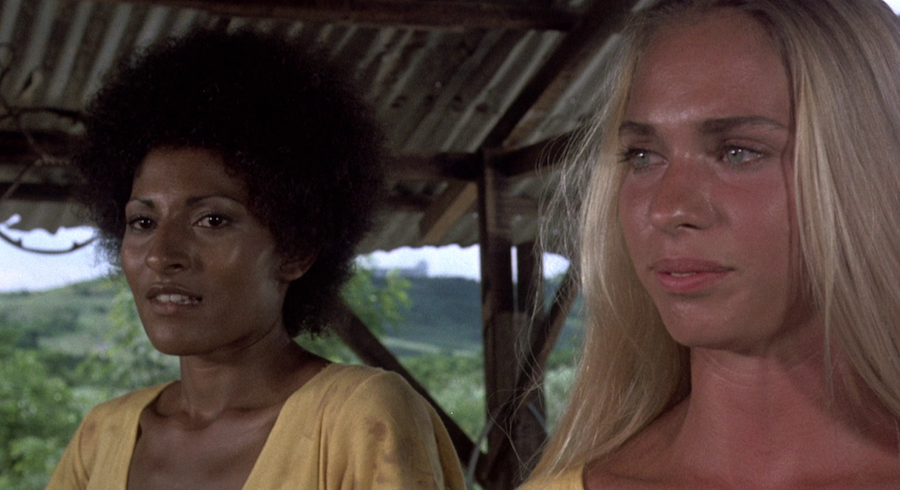 This is one of those movies that's just all over the place. But in a good way. Though the WIP aspect is shorter than one would imagine (lasting only about 13 or 15 minutes) everything that you would want to see in that certain genre manages to get squeezed in. Such as the obligatory shower scenes and the lesbian-warden confrontation. I want to say that this is also one of the better non-solo performances I've seen from Miss Grier. There's little things she does (especially when the duo are disguised as nuns) that has you taking notice on how multi-dimensional she can get as an actress. As for the other half, Margaret Markov, while she may not have you believing that she's a guerrilla, she does as best as she could in playing off of Pam. But the big scene stealer, without a doubt, is good ol' Sid Haig doing his thing. Always the pro at looking to make the most out of what little his character seems to have and succeeding in making the character larger than life. I'd even recommend you see this movie just because of Sid, really.

Lastly, since this is yet another WIP-type of film with the Filipino Revolution backdrop, we're spared of all the politics and just continuously cut to the action of gun battles. As long as the action is filmed well, then I ain't one to complain about it. Let's just say that if you wanted to see more action in The Defiant Ones (which this movie is clearly inspired from) then you won't be let down with this one.