She is met at the airport by Ann Danielli (the journalist Emanuelle will be collaborating with) and her husband Gianni. At a party that night the couple introduce their guest to their wacky (i.e. annoying) friends including Gianni’s perpetually drunk business partner Richard and his exhibitionist wife Gloria, a pretentious Dali-esque artist called Meredith and a Professor of anthropology from the University of Nairobi. It soon becomes apparent that everyone is screwing everyone else but all are jealous of their partner’s affairs. Into this mess of hedonism strides the gorgeous Emanuelle who immediately sets pulses racing, tongues wagging and pants dropping.

For the next 90 minutes the audience is treated to a string of steamy sex scenes in exotic locations. The assignment that brought them to Africa appears to involve little more than Emanuelle chasing some giraffes in a Landrover and Ann jumping over a log. Naked. In slow motion. You want a plot? Read a fucking book. The climax sees Emanuelle service an entire hockey team who are all wearing yellow Game of Death track suits. “Good sportsmen should behave like gentlemen on and off the field” one proclaims. Cue some Russ Meyer style cross-cutting between the heavy petting and pumping pistons as the train they are riding races along the tracks. 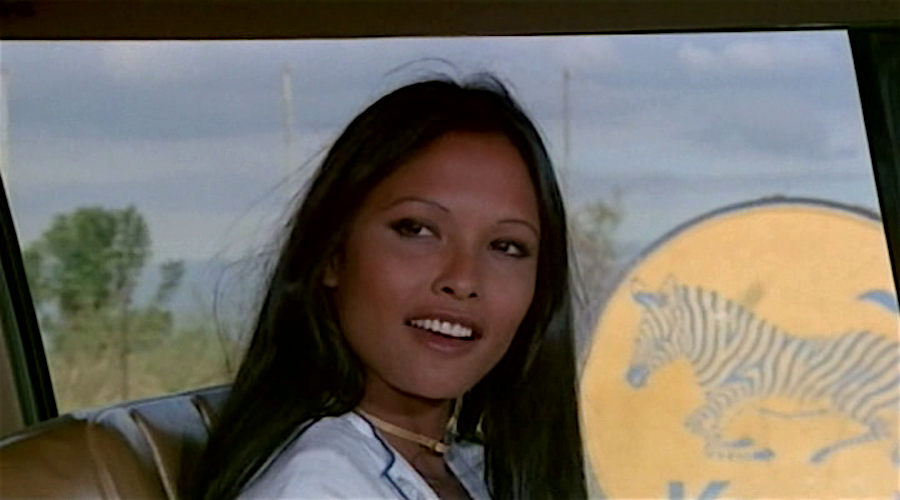 The pacing of the film is lethargic and the episodic narrative meandering but for fans of Laura Gemser it is required viewing. The Black Emanuelle films combine softcore sexploitation with the grotesqueries and exoticism of the Italian mondo shockumentaries; Laura Gemser’s naked body acting like a ‘wish you were here’ postcard sent from a number of international locations. Making the character of Emanuelle a professional photographer relocates the voyeurism of the mondo movie to within the film’s fictional space. As a consequence this disarms the satire present in the more intelligently designed mondo movies (Mondo Cane for example) which confront the audience with the vulgarity of their own thrill seeking. The viewer is no longer guilty or complicit; these are Emanuelle’s traits. It’s no longer us staring through the lens at the funny foreigners it’s her. This notion is most explicit in the scene where our band of rich intellectual goofballs watch a tribe, in full ceremonial dress, perform a song and dance in their mud hut village. Having knocked back a sample of the local hooch Emanuelle joins in the hoedown. Soon she’s dropping her drawers and manhandling the natives. Where the mondo movie gapes aghast at the primitive rites of the ‘dark continent’ Emanuelle strips off all so-called civilisation and dives into the heat of the action.

The crude insertion of hardcore sex scenes into European exploitation and horror movies became relatively common in the late 1970’s however anyone who has seen Jess Franco’s ‘Erotikill’ (the hardcore version of his lyrical masterpiece Female Vampire) will know all too well how a carefully paced and stylishly shot film can be utterly derailed by sudden close-ups of straining shafts and hairy holes. Although the actors (including Gemser) employed stunt doubles for the hardcore stroking and poking the extra footage is in fact remarkably well edited into the main feature with no jarring breaks in the musical score.

Director Albertini returned in 1976 with Black Emanuelle 2 minus Gemser. With Emanuelle In Bangkok sleaze maestro Joe D’Amato took over the reins and, reinstating Gemser in the lead, guided the series in increasingly strange and lurid directions. D’Amato’s efforts are generally more exciting but this film establishes the sexual tourism template for all future episodes. Nico Fidenco’s music is as wonderfully cheesy as you could hope a 1970’s sexploitation movie score to be and the main theme will haunt your dreams I guarantee: “by the sea, under the moon; my body, Emanuelle”.

Gemser met and fell in love with Gabriele Tinti on the set of ‘Black Emanuelle’ and the 2 remained married until Tinti’s death in 1992. Along the way they starred together in a whole host of cool flicks including the wild Women's Prison Massacre and the gruesome Emanuelle and the Last Cannibals. In fact Tinti was almost as much a feature of the ‘Black Emanuelle’ series as Gemser herself and the 2 were frequently called upon to make out for the camera. Nice work if you can get it.