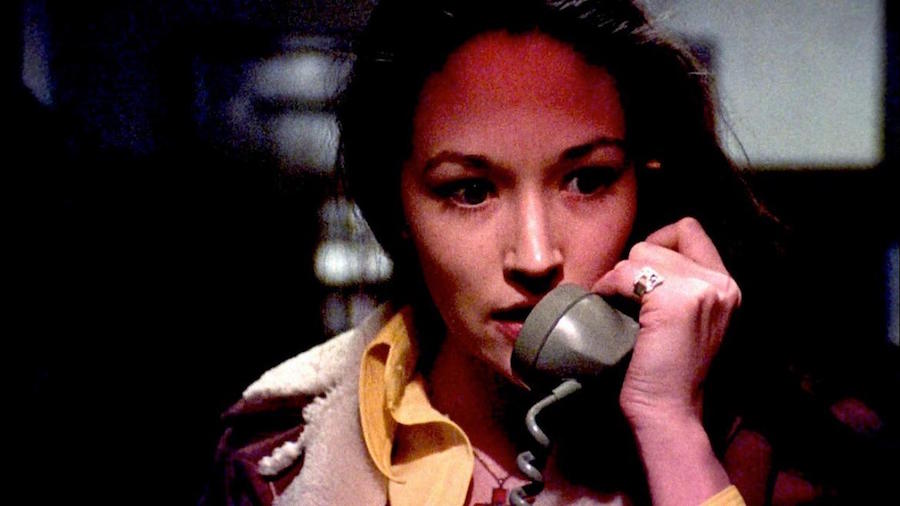 "The calls are coming from inside the house!" Five years before When a Stranger Calls made the above quote resonate in horror fans' minds, Porky's director Bob Clark and writer Roy Moore were terrorizing audiences with their own loose adaptation of the old urban legend that spawned the phrase. In their version of the tale, a group of sorority sisters are terrorized on Christmas Eve by a prank phone caller who has infiltrated their home and is killing them off one by one. Police lieutenant Fuller (John Saxon) thinks that it may be the boyfriend of a young woman named Jess (Olivia Hussey), owing to the fact that she has just told him she is pregnant and wants to get the child aborted, but he has no proof. As he struggles to find the evidence he needs, time continues to run out for the comely co-eds: the killer has been continuing his pace at breakneck speed and shows no signs of letting up whatsoever.

Although Black Christmas certainly beat When a Stranger Calls to the whole murderous prank caller is in the house concept by a few years, its certain that the latter film did it better. While Clark's film is still a marginally decent little slasher flick, it reveals its concept far too early to actually have any real emotional resonance. We already know the killer is in the house from the opening moments of the film, when we get a first-person view of him scaling the sorority house wall and climbing through the attic window. While none of the characters know that he is there, the fact that the film tells us from the outset simply robs it of any serious surprise once the moment is revealed to the characters during the climax.

Not only does the film blow its climactic shock moment, but it also has a problem proving that Jess' boyfriend Peter (Keir Dullea) is really the killer. It is constantly said throughout the film that Peter's possible motive for murder is the fact that Jess wants to get rid of her baby, but he isn't even told that she desires that until we have already established that the killer has been making phone calls to the house and has killed at least one of the sorority sisters. Plus, too much focus is centered around trying to prove that Peter IS the killer, which pretty much confirms that he is not the man they should be looking for. When Jess kills him in self defense during the climax, we are led to believe the horror is over. This probably wouldn't be a big issue if it weren't for the fact that the film's final shot, when we learn the killer still lives, is predicated on it's entire set-up of Fuller's belief that Peter is the killer. Since we know this is not the case, the "surprise" ending isnít as surprising as it should have been.

I also take slight issue with the fact that people point this film out as a progenitor of films like Halloween and Friday The 13th (a claim even made on the DVD packaging). While the film probably did have a little to do with the first-person perspective that is common to many horror films nowadays, the roots of the slasher pic can be traced as far back as Bava's Blood and Black Lace (and probably even farther, thanks to Agatha Christie's Ten Little Indians). Black Christmas may have kicked off a long line of American made slasher films (which is strange, as the film is Canadian), but it certainly wasnít the first one to pioneer the concept.

As far as slasher films go, though, Black Christmas does manage to present its cliched genre trappings in a light that seems fresh only because it managed to be one of the first in a long line of copycat films. There are a few moments in it that are actually disturbing (thanks to the killer's incredibly twisted phone calls), but most viewers may find that the film is only as scary as other films in the genre have ever been. Thanks to Bob Clark's apparent humorous streak (as evidenced in Porky's and his other December holiday paean A Christmas Story), the film also contains a few decent intentional laughs that might have been construed as tension relief if there had been any tension built up to begin with. As with Mario Bava's The Girl Who Knew Too Much, John Saxon's knack for slight comedic moments is a highlight of the film.

Black Christmas has been released as a 25th Anniversary DVD through the combined efforts of Video Service Corp and Critical Mass Releasing. Their transfer of the disc, unfortunately, is open matte, which is something to be taken into account before purchasing it. A warning on the back of the packaging states, Black Christmas was digitally restored and all information exposed on the original negative was transferred to a full-screen ratio of 1.33:1. While this transfer is not letterboxed, no information is cropped and the filmís compositional sense is not marred. As the film screened theatrically in various cropped frame sizes, we felt it appropriate to release the full image as it was originally shot 25 years ago. Though I can certainly understand their wanted to present the film with all of the visual information exposed as it was shot, I wonder if Bob Clark originally had a certain intention in mind with his framing and I feel that an attempt should have been made to determine what an appropriate aspect ratio should have been for the film.

Also, for a 25th Anniversary DVD, there really isnít anything on the disc that would suggest this was anything special. As special features, the disc only offers up the standard cast and crew biographies and the original trailer (which features the tag line "If this film doesnít make your skin crawl, its on too tight!"). Though not listed on the back of the packaging, the disc also features two short interview clips (totaling less than three minutes) with John Saxon. Although it is interesting to hear him speak of the film and his reaction to it twenty-five years after the fact, the simply isn't enough time given to him to give any real insights. For a disc that proclaims the importance to the horror genre that Black Christmas represents, the treatment given to it is disappointingly lacking.