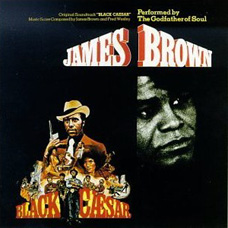 Pay the cost for the boss my friends! Its time for some funky-ass tunes by James Brown! The Godfather of Soul was the mastermind behind the soundtrack of Larry Cohen's Blaxploitation classic Black Caesar (1973) starring Fred Williamson. The whole cool thing starts with "Down and Out in New York City" which I consider one of the best black music tracks I've ever heard. James Brown's voice is so powerful and the lyrics including lines like "So you try hard or you die hard. No one gives a damn!" just make you feel like youre in New York City, in the middle of crime biz with 70s funkiness. With "Blind Man Can See It" a totally different tune hits the score. Its a very cool and mellowed out song with some standard metropolis sounds and a flow reminding me of Siegfried Schwab's and Manfred Hubler's music. It also has a slight touch of reggae.

"Sportin' Life" can nearly be considered a funny song. It has a very "childlike" rhythm and flows like songs from 50s "happy family" movies. It brings an extraordinary mood into the theme. With "Dirty Harri" another track hits and the music is similar to Schwab and Hubler. It has this funky rhythm mixed with piano tunes that reminded me of the Vampyros Lesbos - Sexadelic Dance Party soundtrack. However, totally different is the song "Boss" in which James Brown again shows what a fabulous singer he is. The sound itself has a rhythm that reminded me of the music from the Jackie Brown soundtrack somewhere, but because of James Brown's butt-kicking voice, it gets this soul touch you know him for. Its also a tougher song like the ones before.

"Make it Good to Yourself" is a very fast song, perfect for some classic exploitation car chase scenes. James Brown's voice brings depth into the tune and he sings in a nearly "nervous" way, makes the whole exciting atmosphere come up. Great song! "Mama Feelgood" is a common funk 'n' soul tune sung by a woman. She has a great voice, similar to Tina Turner. The rhythm and beat of this song really hits the nerve of the time and the atmosphere of the movie. After that "Mama's Dead" starts. A beautiful ballad featuring another female singer. She has an awesome and powerful voice that hits you deep, plus the tragic lyrics, this is what a ballad should sound like on a blaxploitation soundtrack!

"White Lightning (I Mean Moonshine)" is the perfect tune to make the film's atmosphere clear. It has again this metropolis-city sound you should know from other films, plus a nearly jazzy rhythm. However, it perfectly turns into the following song "Chase" which is a very fast and rocking tune. Fast and energetic drumplay, synth-sounds and again, the flow of the duo Hubler-Schwab make this an exciting action song! "Like it is, Like it was" is a brilliant ending song for this soundtrack. James Brown perfectly sings this dynamic but slow paced Jazz meets Soul mix that slowly ends the mood of Black Caesar. You're back in reality, how sad. So let's turn it on again!

James Brown's Black Caesar soundtrack is a great piece of classic soul music. He mixes soul with funk, jazz, rhythm 'n' blues, rock and some slight synth-sounds that make this whole thing a great 11-track experience for every lover of Blaxploitation soundtracks or the Godfather of Soul.