Big Bosoms and Square Jaws: The Biography of Russ Meyer 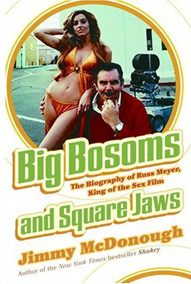 Russ Meyer, cult hero, creator of the sexploitation film, and the man the Wall Street Journal called the King Leer of Hollywood, made movies that filled the big screen with “big bosoms and square jaws.” In the first candid and fiendishly researched account of the late cinematic instigator’s life, Jimmy McDonough shows us how Russ Meyer used that formula to turn his own crazed fantasies into movies that made him a millionaire and changed the face of American film forever. This former WWII combat photographer immortalized his personal sexual obsession upon the silver screen, creating box-office gold with The Immoral Mr. Teas in 1959. The modest little film pushed all preexisting limits of on-screen nudity, and with its success, the floodgates of what was permitted to be shown on film were thrust open, never to be closed again. Bringing his anecdote- and action-packed biographical style to another renegade of popular culture, New York Times bestselling author of Shakey Jimmy McDonough offers a wild, warts-and-all portrait of Russ Meyer, the director, writer, producer, and commando moviemaking force behind the sexploitation classics Vixen, Beyond the Valley of the Dolls, Faster Pussycat! Kill! Kill! and many others. (Google Books)