Barbara (Lynda Day George) & Larry Andrews (John Saxon) arrive on an unspecified island in the South Pacific and are greeted by Larry’s friend, and Barbara’s ex, Del Georgio. Del has arranged somewhere special for the 2 of them to live while Larry is working on a construction project that Del has invested in, and he has secured the enormous house for a bargain price. One small catch though: the place is supposedly haunted.

The locals believe that the spirit of Casa Fortune’s previous owner Alma Martin still wanders its halls. In a flashback we see her unfaithful husband, in fear of Alma’s black magic powers, murder her with poisoned wine only for the witch to rise from her grave and twist the bastard’s head around 180 degrees. Sure enough on the first night the Andrew’s spend in their new home evil Alma appears, eyes glowing green, to spy on her new houseguests as they sleep. Alma soon begins to exert a malignant influence over Barbara and anyone who attempts to persuade Babs that, you know, maybe living in a house with a witch who wants to possess your body from beyond the grave isn’t such a hot idea gets dealt a swift black magic smackdown. In one such display of devilish power she causes the doors to fall off one character’s car before the whole thing bursts into flames and plummets off a cliff.

You’ll know when Alma’s working her voodoo because Barbara’s face starts glowing green. The most bizarre consequence of Alma’s attempted possession however is the swelling and discoloration of Barbara’s wedding ring finger. The digit trebles in size and turns brown looking as if she has had a turd grafted to her left hand. Overcoming his initial scepticism Larry visits a local spiritual healer called Doctor Solomon who tells him that this phenomenon represents “the point of strongest resistance” to Alma’s spiritual “infection”. The Doctor’s daughter stares straight at the camera as if empathising with the audience’s bemusement. She too soon meets a dire end; zapped into a pile of ash by the green laser beams that Alma fires from her eyes. 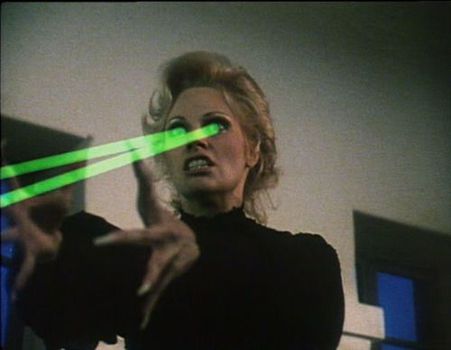 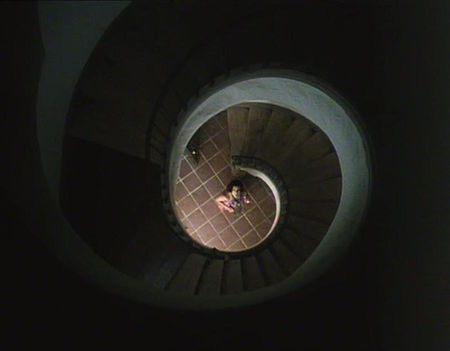 And what is Doctor Solomon’s great plan for destroying the forces of evil? Stuff Alma’s crypt full of explosives and blow that sucker sky high!! Yeah, that’ll do it Chief.

I can’t help but love any movie where a character shoots lasers from their eyes. It’s just one of those things like ninjas or Bigfoot or characters who you thought were human turning out to be cyborgs. Stick any of that shit in a movie and I’ll be there laying down my hard earned for a seat in the front row. I’m a sucker for ‘haunted house’ movies too and despite, or maybe because of, it’s goofy special effects, dumb dialogue and predictable plot ‘Beyond Evil’ puts a smile on my face.

The always dependable John Saxon (Enter The Dragon, Black Christmas, Battle Beyond The Stars) gives a no-nonsense blue-collar performance even though the character of Larry is pretty dull. As for Lynda Day George (Pieces, Mortuary), the best I can say is that she’s very . . . err . . . blonde in the role of Barbara. When she’s called on to act possessed she simply talks in a deeper voice than normal. Director Herb Freed is also responsible for the fun slasher flick Graduation Day.

For the raincoat crowd and the horror hounds: Saxon spends a lot of time without his shirt on but there are no lady lumps on show and gore is minimal. The film’s plot is remarkably similar to 1982’s The House Where Evil Dwells (starring Susan George and Doug McClure) which also concerns a married couple moving to an Asian country, renting a haunted house and becoming embroiled in a bizarre love triangle influenced by the vengeful spirits of lovers past. In fact the 2 films would make an ideal pairing if you fancy hosting your own haunted grindhouse double-bill.