After World War III, power is measured in gallons and no one is stronger than a cruel army that commands the "Battle truck" - a fully armored and mobile command center for a warlord named Straker. They ravage the country side, killing for fuel and killing for power. Naturally, they meet their match in a lone motorcyclist named Hunter - played by THE WARRIORS' Michael Beck.

This Roger Corman produced film starts off strong with radio broadcasts explaining society's breakdown and mankind's frantic struggle for fuel before an awesome power shot of the titular BATTLE TRUCK - which may or may not have been echoed later in George Romero's post apocalypse vehicle "Dead Reckoning" from LAND OF THE DEAD (2005). Honestly, the concept can be traced back to 1977's DAMNATION ALLEY which I feel this film somewhat subverts albeit with a smaller budget and a slightly darker 80s outlook.

BATTLE TRUCK (shot in New Zealand) was released on the heels of Australia's MAD MAX 2 - a film most notable for popularizing the punk aesthetic for future savages. However this film doesn't quite fall into that vast 1980s genre of Road Warrior rip-offs, but rather fits more into the traditional post-apoc genre (pre punk rock if you will) like the aforementioned DAMNATION ALLEY - which itself was based on a book of the same title published in 1967. The idea of people trying to survive amidst a nuclear fallout and fighting for resources has been popular since the 1950s and honestly goes hand-in-hand with the other Cold War anxiety Sci-fi subgenre of alien/monster invasions. 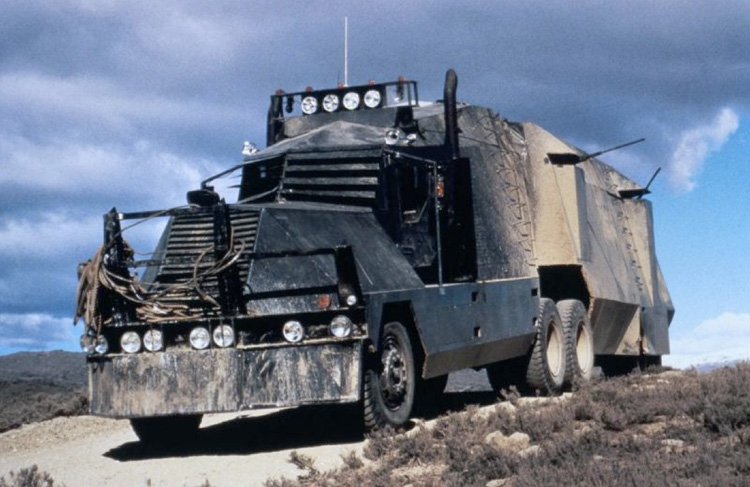 The nuclear apocalypse genre can be found earlier in literature with titles such as Pat Frank's ALAS, BABYLON (1959) and Harlan Ellison's novella A BOY AND HIS DOG (1969). Cinematic examples exist as early as Roger Corman's PANIC IN THE YEAR ZERO! (1962) but more to the point, the post-apoc genre shifted to gasoline wars after the all too real shortages of the 1970s. The genre updated itself by addressing the new fears of its time - when fighting over gasoline became a tangible reality. Therefore BATTLE TRUCK doesn't rip off MAD MAX 2, but rather was born of the same circumstances - via the zeitgeist if you will. Besides, there aren't any punkers in this movie.

Although our hero Hunter never quite lives up to Michael Beck's best known badass role from THE WARRIORS, he does eventually shine once the chips are down via a souped up ass-kicking Volkswagen Beetle (courtesy of CHEERS' John Ratzenberger. It's the most exciting sequence in the film and all of the car stunts do deliver in this picture which boosts the film's overall entertainment value because it's only fun when there's real danger, kids. And I'm pretty sure a stuntman actually got run over from behind while pretending to be shot dead in one scene. There's also excellent ariel photography of Hunter on his dirt bike and again with the Battle truck which not only elevates the production value, but really captures the speed of the vehicles. Cinematographer Chris Menges would go to lens many more films, eventually into the realm of Hollywood A pictures.

Director Harley Cokeliss clearly knows what he's doing here and a few years later would direct one of my favorite 80s movies BLACK MOON RISING (which may or may not be a good film) featuring another wicked car. All in all, if post-apoc is your thing (and why wouldn't it be?) then definitely check out this lesser known flick - particularly as it's one of the last before George Miller hijacked the genre and gave it a mohawk.