Battles Without Honor and Humanity: Volume 1-5 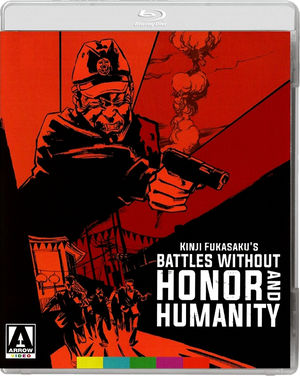 Battles Without Honor and Humanity | Buy from: Amazon.com | Amazon.uk

When Battles Without Honour and Humanity first hit Japanese screens in January 1973, partially inspired by the success of The Godfather, it blasted out a new Ground Zero for crime cinema not only in Japan, but in the rest of the world, and spawned a legendary series that would lead to additional episodes, spin-offs, and countless imitations.

1947. Ex-soldier Shozo Hirono (Bunta Sugawara), after proving his ability with a gun, emerges from the teeming black markets of postwar Kure City into the professional world of the yakuza. Shozo makes his way from prison to boss in the newly-formed Yamamori family via gang feuds, assassinations and the shifting allegiances of his fellow mobsters, despite his own growing disillusionment with the men he is supposed to respect.

Based on the true account of a Hiroshima mob boss and supplemented by meticulous research by screenwriter Kazuo Kasahara, this ferocious, violent saga was directed in a dynamic, newsreel-like style by Kinji Fukasaku, and stunned cinemagoers in Japan upon its release. Like a head-spinning mixture of Martin Scorsese and Paul Greengrass, the film's frenetic cinematography, colourful characters, and iconic score by Toshiaki Tsushima will leave you thrilled and exhausted, as you embark on one of the world's greatest gangster film series. 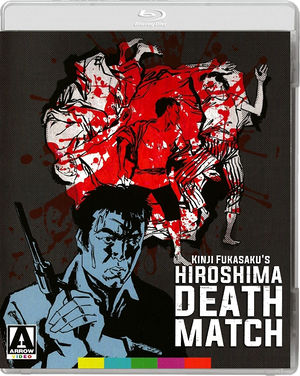 Hiroshima, 1950. Demobilized kamikaze pilot Shoji Yamanaka (Kinya Kitaoji) is released from prison and finds himself hungry and broke. Following a bust up with a local gang, he earns the psychotic wrath of local underboss Otomo (Chiba), but Yamanaka's suicidal impulses are soon put to good use as a hitman for another gang, befriending series hero Shozo Hirono in the process. Despite a budding but forbidden romance with the boss's niece (Kaji), Yamanaka's instability and recklessness soon begin to make him a dangerous liability. Taking an even more fatalistic turn than the series' original entry, Hiroshima Death Match tells the story of the ultimate loser, based on a true story uncovered by screenwriter Kazuo Kasahara while interviewing real-life Hiroshima yakuza for part one. A prosperous era may be dawning for the protagonists, but one with new characters and new grudges to draw them more deeply into its world of blood and betrayal. 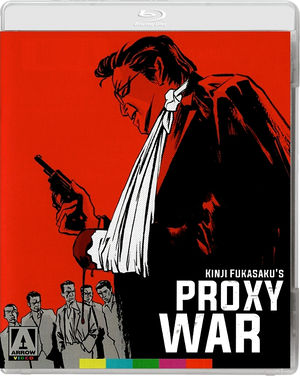 Moving beyond the true stories dramatized in the first two episodes of the Battles Without Honour and Humanity series, director Kinji Fukasaku and screenwriter Kazuo Kasahara embark on their most complex narrative yet in Proxy War, a multi-character web of alliances and betrayals set against the economic growth of Japan as it prepares to host the 1964 Olympic games.

1960. A power vacuum is formed within the Muraoka family when underboss Uchimoto (Takeshi Kato) refuses to avenge the assassination of a superior. With the help of series hero Shozo Hirono (Bunta Sugawara), Uchimoto pledges loyalty to the powerful Akashi gang, but is soon expelled from the Muraoka for the act. Meanwhile, Akashi rivals the Shinwa Group form their own pact with Muraoka, and the enmity between the two gangs threatens to erupt into bloody violence across all of western Japan.

The labyrinthine plot line of Proxy War — which continues in episode four, Police Tactics — approaches pure Jacobean drama as power players, kingmakers, and petty soldiers clash weapons and words in a stylized ritual of alliances and betrayals. Considered by many critics to be the best episode of the series,Proxy War is complex crime drama of the highest order. 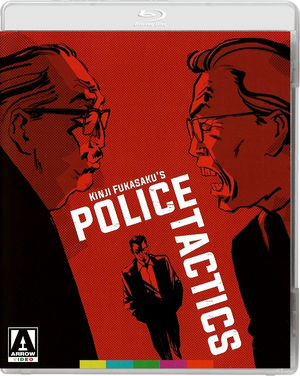 Continuing the storyline begun in episode three of the Battles Without Honor / Honour and Humanity series, Police Tactics sees director Kinji Fukasaku and screenwriter Kazuo Kasahara further depicting the life-and-death struggle of the gangsters of Hiroshima and Kure, even as the rest of Japan is beginning to tire of their old-fashioned codes.

1963. Shozo Hirono (Bunta Sugawara), expelled from the Yamamori gang, has allied himself with the cowardly Uchimoto (Takeshi Kato) and the Akashi family, who are engaged in a power struggle with the Shinwa Group, allied with the Yamamori. But mainstream society, enjoying unprecedented economic prosperity, will no longer tolerate their violent criminal activities. The police begin a major crackdown, putting the gangs on the defensive. But rogue soldiers on both sides still refuse to keep the peace, earning the wrath of both their bosses and the forces of law and order.

The last film of the series written by Kasahara, Police Tactics was intended to be the final episode, until its phenomenal success led to one additional entry. A fîn de siècle mood permeates throughout, with characters fully aware of their impending obsolescence, yet striving for a return to the less prosperous, but simpler post-war glory days. 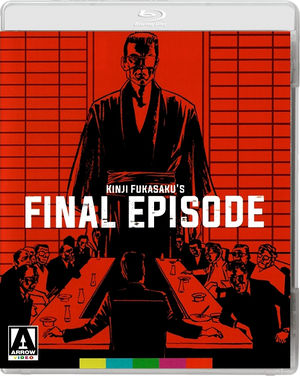 The Final Episode of the Battles Without Honour and Humanity series brought a new, more contemporary mood to the film and its characters. The yakuza may be starting to resemble a legitimate business, but director Kinji Fukasaku, working with new screenwriter Koji Takada, never lets the audience forget their violent origins, and their tried-and-true methods of accomplishing their business.

1966. After a police crackdown, the gangs of Hiroshima and Kure have formed a massive, multi-family political and economic coalition called the Tensei Group, seeking a way forward into the 1970's as part of Japan's economic bubble. Shozo Hirono (Bunta Sugawara) finds himself increasingly alienated from this semi-legitimate form of corruption, particularly as acting Tensei Group chairman Matsumura (Kinya Kitaoji) tries to put the gangs on a new, more business-like path. But old habits die hard, and when rivalries surface once again, they bring with them the promise of more bloodshed.

The long-awaited conclusion to the epic series is an elegy for the bad guy, with the harsh realization that Japan's economic growth came about only through the sacrifice of the blood of its young men, victims of twenty long years of Battles Without Honour and Humanity.