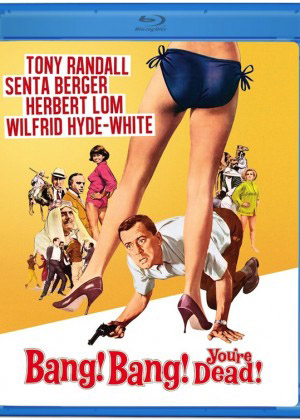 One of the six travelers arriving at the Marrakesh Airport is a diplomatic courier carrying $2,000,000 in bonds. He is paying off a spy, Mr. Casimir (Herbert Lom, A Shot in the Dark), for secret documents that could shift a crucial United Nations vote in favor of the People’s Republic of China. Tony Randall (TV’s The Odd Couple) plays Andrew Jessel, an American architect posing as an oil representative. On the bus to his hotel, Andrew meets fellow passenger Kyra Stanovy (Senta Berger, The Ambushers), a beautiful CIA agent posing as a journalist. The smitten Andrew reluctantly agrees to help Kyra dispose of a dead body planted in her room by Casimir’s henchmen. Andrew becomes even more enmeshed in the intrigue when he inadvertently takes the secret documents during a trip to Casimir to protest the attempted frame-up. Marked for death, Kyra and Andrew flee through the streets and bazaars of Marrakesh into the hills, followed by Casimir’s right-hand man Jonquil (Klaus Kinski, Fitzcarraldo) and groups of his henchmen. One of the many highlights of this action-packed comedy is the exotic Moroccan locale beautifully shot by the great cinematographer Michael Reed (On Her Majesty’s Secret Service). The wonderful cast also includes Wilfrid Hyde-White (On the Double), Terry-Thomas (I’m All Right Jack), Margaret Lee (Secret Agent Super Dragon), Burt Kwouk (Return of the Pink Panther) and was directed by Don Sharp (The Kiss of the Vampire, Bear Island). (Olive Films)