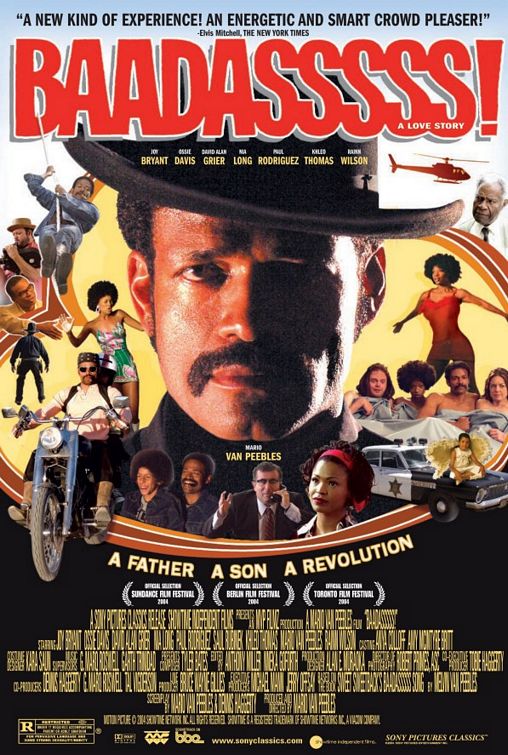 BUY THE DVD: At Amazon.de

Mario Van Peebles plays his own father Melvin in this film about the making of Sweet Sweetback's Baadassss Song, the surprise hit that started black exploitation cinema. Despite financial struggles, trouble with the police and crime and drugs, Melvin manages to use his mainstream movie fame to make an underground exploitation film that plays into the African American community's hearts and minds by tackling all the controversial subjects that troubled people at the time, such as racism, police brutality, crime and social injustice. The movie tells the story from Melvin's perspective, and in quite a humorous and liberal way. This is not a mockumentary for 12-year olds, this movie has everything the movie had, that is is telling you about: sex, nudity, drugs, crime, rock and roll music, politics, foul language and violence. But at its core, it is a lovely hommage to his fathers work and a film that works very well although it won't knock you out of your socks, despite the incredibly good looking women and a few totally awesome cameos. All in all, the movie is probably best consumed in conjunction with all the DVD extra material, as part of a wider effort to educate yourself about blaxploitation cinema, which is what the film tries to accomplish in the first place. And maybe you'll pick up Sweetback on DVD right after this, if that's a movie you've never heard of.

The feature film's video quality is, as we know from Koch Media, without room for complaints. A pristine transfer, that may not be top notch but does the movie justice and won't look shabby on your big screen. They did a very good job presenting this rather unknown (at least with the target market) film on DVD. The same goes for the audio, which is an average but solid job for a film that rarely makes much use of surround sound, but there are no audible flaws.

"The Birth of Black Cinema" is a 21 minute featurette about the making of this film (with lots of interviews, archival footage and scenes from the film), and its parallels to the original film and its context. A featurette about a film that's about a film that's about the real world, so to say. Compact, short, but informative and well made, this makes a nice addition to the feature film, although there are other, lengthier efforts out there. Being a featurette making-of though, it doesn't stretch too far out of its making-of purpose, and for that, it's pretty darn good.

The extras on Disc 1 consist of the Original Trailer (English audio, the same trailer is also on Disc 2 but in German), a slideshow gallery with pictures and impressions from the film, and some Text files about the film that are all in German only.

The "Original trailer" on Disc 2 is actually the trailer only with German audio unfortunately. There's an interesting 11 minute footage from the premiere (lots of interviews), that's in English. The 31 minute "Questions and Answers with Melvin van Peebles" is a very interesting press conference with Melvin that covers most topics that are intesting, about the making of Baadaass as well as Sweetback. You have to give them credit for including this, because that's something you rarely see on a DVD, unfortunately. The Poster Gallery is just what the name suggests.

To start off, this DVD is worth getting even if you're not into reading some German text files. All the important content on this DVD is in English, and its all well presented. Amazon.com doesn't list this title anymore (aside from third party sellers) so this is a serious option. The film is really well made and will please every fan of the genre. Although the extras are not as extensive as you might imagine, this is just the right dose for a newcomer to peek into the genre. A truly nice presentation of a film that has the potential to not only open genre film veterans' eyes to some new aspects, but also bring some new and younger folk to watch blaxploitation cinema on DVD.

Special thanks to Koch Media for providing this DVD