Miami, 1994-Although it looks (And sounds) no different than a pre-MIAMI VICE era, we're introduced to Crockett and Tubbs...Sorry, Mike Ross (Christopher Connelly) and Washington AKA Mohammed (Tony King). Instead of cops, these two guys are hitmen on a score. After they get a particular job done, they recieve their paycheck and are on their way, by boat, for some relaxation in Trinidad. Meanwhile nearby, A scientific coast team is going through an attempt to help rise a Russian nuclear submarine from the depths below. Joining the team is newly arrived professor Cathy Rollins (Gioia Scola). Cathy is given an interesting artifact found by a fellow professor named Saunders (George Hilton, who's playing a geek for once) it appears this artifact has some "Atlantis" relations which is the reason why Cathy was brought on board. But before she can solve the puzzle, a radioactive leak from the sub causes the land of Atlantis to submerge and the entire crew is forced to jump ship. The remaining survivors are picked up by Mike and Washington and find their way to the nearest land. What they didn't plan on was that this land is now run by New Wave Barbarians! So from here on out, the movie becomes a action-survival flick with very little story and exposition. The only remaining plot points to be found is that the Barbarians (Who call themselves "The Interceptors") are after Cathy since she can bridge the re-existence of the people of Atlantis. The Interceptors eventually get a hold of her and a last attempt is made by our heroes to try and rescue her. 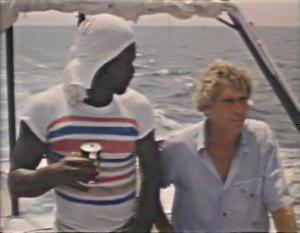 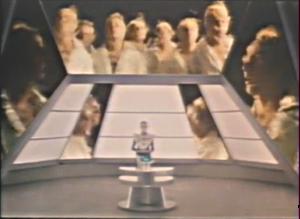 Ruggero Deodato made this? I'm not slamming the guy because, seriously, I did find the movie to be quite entertaining, but I was (At least) expecting a more developed movie with a less complicated storyline. But I guess all you have to do is take one look at the Interceptors and say to yourself, "Who needs a story?" You just have to go with the flow that you're in for a decently fun shoot-'em-up movie. I had to admit that some of the set design in making this certain town look like the victim of the apocalypse was quite well done. But the biggest joy I had was that the action scenes lived up to what I saw in the trailer (Which was what made me anxious to see this) Lots of high-flying, screaming punk-barbarian stuntmen getting blown away (Gotta love that!) Which is eclipsed by a bus chase that is well choreographed and nicely shot. Sadly, once our heroes arrive to Atlantis, the movie merges into extreme goofball territory. But since the movie has become so ludricous by this point, you just have to (Once again) go with the flow and try to have fun out if it.

So once again, it was surprising to see Mr. Cannibal Holocaust deliver a flick like this. Maybe it was his way of showing that he was a multi-dimensional fillmmaker or maybe it was his way of going against type due to the savage controversey of that certain earlier film by him. Regardless, this sci-fi/apocalyptic-action adventure was an interesting move on his part and, though flawed, manages to be a pretty good time. Worth checking out if you're doing a double-feature with this and Escape From New York. Albieit, a less polished version of EFNY.