You know how some movies just leave you feeling dirty after watching them? That same kinda feeling you get after eating a 10 piece Kentucky Fried Chicken variety bucket all by yourself; greasy, nauseous, bloated and somewhat ashamed. You know you did a bad thing. And your body (or your brain in the case of a movie) isn’t your friend any more after what you put it through. Yeah, you know that feeling right? You get that same feeling every time you watch a movie with Hugh Grant in it. And that’s how I felt after watching ‘Apocalipsis Sexual’. Dirty, you hear me? Dirty.

A swarthy gang of sex-crazed criminals, made up of two guys, two girls and Ajita Wilson, kidnap a beautiful young heiress in this Spanish sexploitation flick that is so sleazy it would probably make Jess Franco blush. The heiress happens to be a virgin and this fact excites everyone in the gang particularly one guy who gropes the girls crotch while she is unconscious. Wasting no time getting down to the dirty, wicked Wilson and one of her female accomplices, played by the always agreeable Lina Romay, make out on the floor of a broom closet in front of their horrified hostage. Romay inserts a long red candle in Ajita’s rear before slipping on to the other end for some waxy frottage. The candle is not lit I should add but either way kids, don’t try this at home without the supervision of a responsible adult. For some reason I had the Elton John song ‘Candle In The Wind’ going round in my head after watching this scene.

And then some other stuff happens. Or rather it doesn’t. The gang demand a one million dollar ransom from the girl’s father and while they wait for him to cough up the dough they proceed to assault his daughter in various tag team combinations when not screwing, sucking, licking and tugging on each other. While some sub-Gary Numan synth rock plays on the soundtrack Lina sparks up a fat doobie. Wilson strips off and lies down on a pool table while the gang roll dice on her stomach to decide who gets to rape the heiress first. Lina wins (Hurrah! Go Lina! Go Lina!) and after filling her snout with coke proceeds to shove the handle of a pool cue up the young girls you-know-what-know-where. Maybe they have different rules in Spain but that never happened in any game of pool I ever played.

So after all this abuse Madeline, the heiress, decides that she’s in love with Clark, the leader of the gang, and will do anything to make him happy. Now, please tell me if I’m being too pedantic but I found this particular plot twist to be somewhat implausible. Anyway Ajita Wilson is super-tranny-bitch-jealous of Madeline and starts plotting some payback while Romay proceeds with her mission to shove foreign objects into the vaginas of every female member of the cast. As part of her initiation into the pervoid gang Madeline has a switchblade inserted into her you-know-what-know-where in eye-watering close-up and when Clark overhears Ajita planning his and Madeline’s murder he turns the tables and soon she too is on the receiving end of a little prick.

See what I mean? You probably feel dirty from just reading this review huh?

The print I saw contained extensive, inserted, hardcore footage that helped crank the film’s sleaze-o-meter up to eleven and oh boy, is the sex in this movie ugly! Flacid, flapping, hairy and scary; if you are in anyway aroused by this shit you need to seek medical attention right away.

The visual highlights of the film are in fact Ajita and Lina’s camp-tastic 80’s outfits; sparkly gold hot pants, luridly coloured swim wear and nylon leotards. And in case any ladies in the audience are feeling left out the guys get to show off by the poolside in some tiny leopard print undies too!

Co-director numero uno Sergio Bergonzelli was also responsible for pervy pseudo-giallo In The Folds of The Flesh and the nunsploitation flick ‘Our Lady Of Lust’. Co-director numero doo-doo Carlos Aured is best known for his many collaborations with Spanish horror movie legend Paul Naschy which include such chillerama classics as Horror Rises From The Tomb, ‘Vengeance Of The Mummy’ and ‘Curse Of The Devil’. Unfortunately ‘Apocalipsis Sexual’ displays none of the colourful style that makes Aured’s horror-fantasies so appealing. It’s my guess that one director shot the main feature and the other shot the hardcore business. As is common when movies exist in both soft and hard versions, the edited together footage, and the accompanying music, rarely matches although it’s apparent that Romay and Wilson did all their own stunts, if you catch my drift.

Fans of Ajita’s fanjita and Lina’s fangina will wanna rush to the front row of their local grindhouse to see this one. The rest of you are advised to stay home with a 10 piece Kentucky Fried Chicken variety bucket and lick your fingers. 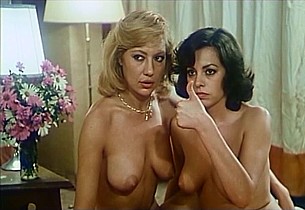