Again, just like my previous reviews, catching a trend that's popular was a cliched category in exploitation films. From Jaws or Star Wars to Dawn Of The Dead to Cannibal Holocaust, there are TONS of cash-in movies out there. And today I'd like to talk about another King Kong cash-in called A*P*E.

The plot is very familiar: an actress goes to Korea to shoot a film while an escaped gorilla destroys the city of Seoul. That's it. That's everything you need to know about this film because it's not famous for the plot, the special effects, or how classy it is. It's famous because it's "so bad it's good". Seriously, this is very similar to Star Crash. It has bad acting, a hilarious gorilla, stupid dialogue etc. Everything you need for a joyride is here.

For example, the first shot of this film shows us a crew on a boat that the gorilla will break loose from. We learn from a hilarious dialogue that the gorilla will be shown at Disneyland. I mean, seriously? Disneyland is the best place for showing a monstrous creature? Nevermind, because the next scene shows the gorilla destroying the ship, while the crew just say "Oh sh*t!" in the most deadpan voices and faces you could imagine. Then, our gorilla "fights" a shark. (Actually, he just swings the shark around. But who cares, the exciting music tells us that it's called fighting!) 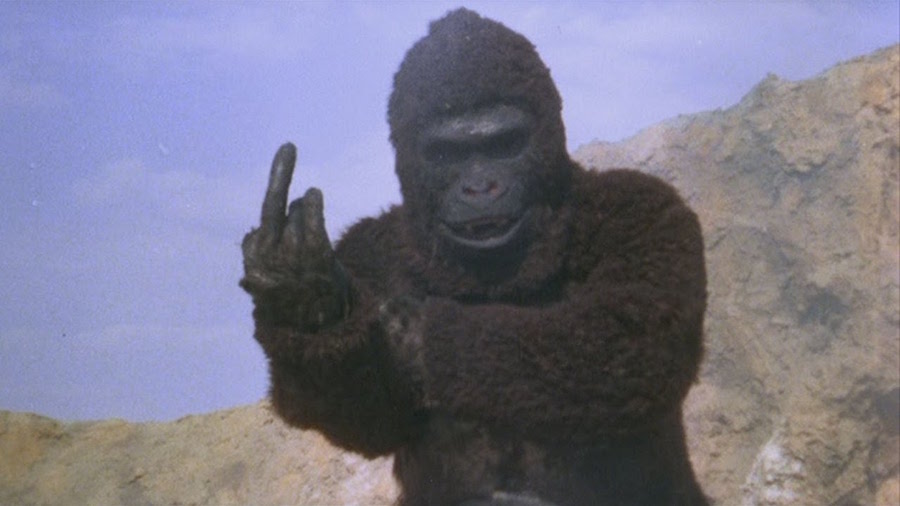 Later, there's LOTS of unintentional comedy here. The most famous one is the fighting scene. After he destroyed one of the army helicopters that attacked him, he shows us his middle finger. I'm serious. This is the only movie that you can see a gorilla give the audience the finger.

Also, there are lots of shots that has objects flying out at the audience, from a barrel of oil that the gorilla throws to bullets that a tank shoots to kill the gorilla in the end. This is because the film was shot and released in 3D. So when you watch it in 3D you can watch things fly towards you...including that middle finger, I guess.

Overall, it's extremely hilarious and entertaining. If you love Star Crash or The Room, check it out.