Apache Blood opens to a soldier running frantically through the woods. A tired looking Ray Danton catches him on horseback and kills him off screen. The film then explains through voice over that "S'he" or "He who where's the yellow shirt" (Danton) has been on the warpath since the US military attacked his sleeping village comprised mainly of women and children on May 16, 1866, killing all but a few survivors in the Arizona territory.

We then find a small reconnaissance unit of US Calvary men discussing their reluctance of catching up with Yellowshirt. The group is headed up by the legendary woodsman, Sam Glass (played by Dewitt Lee). He instructs them to suck up their fears and be prepared for a fight. The following day, as Glass scouts ahead, he is attacked by a bear. Once discovered, the soldiers decide to leave him for dead. Without their scout, the group succumbs to their initial trepidations and each member sets out to retreat the wilds of Arizona and the wrath of Yellowshirt. "S'he" and his small band eventually catches each member of the group and dispatches them with prejudice in some (not so) very interesting ways. 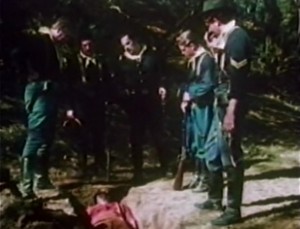 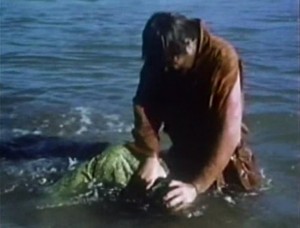 Meanwhile, Glass manages to recoup from his injuries despite being abandoned with no water or supplies. He meanders through the desert in search of civilization and suffers from a combination of dehydration and fatigue. The film ends in a long chase by foot between Glass and Yellowshirt. As they run for a military fort on the horizon, their chase comes to an abrupt (confusing) halt.

Originally shot in 1971, Apache Blood was most likely Vern Piehl's attempt to capitalize on the success, albeit controversial, of the recently released Soldier Blue (1970) starring Candice Bergen and Peter Strauss. Soldier Blue's controversy centered on its retelling of the Sand Creek Massacre, which took place in 1864 in the Colorado Territory. On November 29, 1864, a 700-man force of Colorado Territory militia set out and destroyed a village of friendly Cheyenne and Arapaho Indians encamped in southeastern Colorado Territory. In all, 70 to 163 Indians were killed and mutilated (two-thirds were reported to be women and children). Soldier Blue set itself apart as one of the earliest examples of what is known today as "Revisionist Westerns" in which the cowboy (hero)/Indian (villain) motif was set on its head. The film was vastly criticized for its violent portrayal of the massacre. It was subsequently edited and would take several years before the uncut version of this film would reappear.

Nevertheless, Apache Blood was not released until 1975. Although it stays true to the revisionist theme, the depiction of violence is rather tame. Basically, this film plays as a western with a Johnny Firecloud feel. Other than Ray Danton, the remaining lineup are primarily one-hit wonders and do not reappear in any films of note. From an Indiansploitation perspective, Apache Blood contains all the markers, but it comes nowhere near satiating the viewer's normal appetite for these types of films.