Amin: The Rise and Fall/Review

< Amin: The Rise and Fall

Quick history lesson.   Like most tyrannical despots, Idi Amin Dada was a thoroughly despicable human being.  Born somewhere around 1925, Amin was unaccomplished at school and left with nothing more than a fourth grade education. He then joined the Colonial British Army, then the regular army after Uganda's independence from Britain in 1962.  Here he rose through the ranks and struck up a relationship with then Prime Minister Milton Obote which lead to them both being implicated in a plot to smuggle ivory and gold into Uganda from Zaire which was a big no no.  When the Ugandan Parliament demanded an investigation Prime Minister Obote decided it would be just easier if he overthrew the whole lot of them, which he proceeded to do with the backing of Amin and the army.  Things ran smoothly for a few years until a rift developed between Obote and Amin that was eventually settled when Obote was away attending a Commonwealth Heads Of Government meeting and Amin just took over the whole country.  Though the people of Uganda were at first happy to see the back of Obote as he was a dick they had no idea what the fuck was in store for them after Amin got a real taste of power.  Corruption, persecution, terrorism, all topped off with a "missing" persons list of at least 500,000 and by the time of his exile in 1978 Amin had left a legacy that put him quite close to the top of the Biggest Douchebags To Ever Run A Country chart. But fear not as he got exactly what was coming to him in the end...oh wait a minute, no...no he didn't.  As opposed to dying a horrible and violent death involving alot of fire he passed away in a hospital bed in 2003...which seems to happen to these kinds of jackasses far to often. 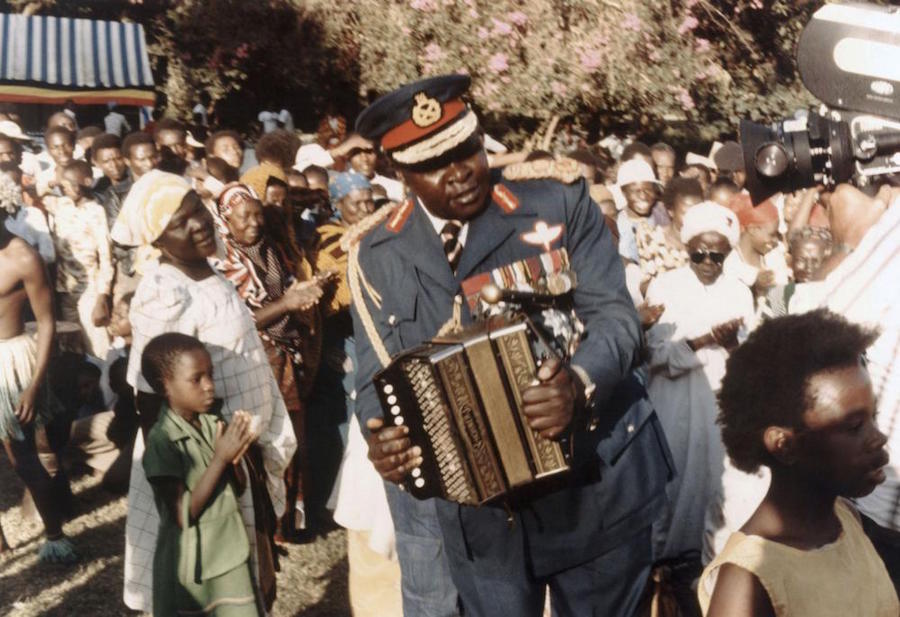 "So why..." I hear you asking "would they want to make a movie about such a rotten piece of pond scum?".  Well I'll tell you: Money.  People are fascinated by the horrific things that man will do to his fellow man (hell, if it wasn't for Hitler the History Channel would have no programs) so movies about  real life genocidal bastards are always going to draw in a crowd and at the end of the day that's all that matters: Cold. Hard. Cash.  It's what cinema's based on.  Hell it's what Grindhouse itself is based on, the more we shock you the more you'll pay. So Idi Amin was just tailor made to have a film tailor made about him.  That film is Amin:The Rise And Fall.   For an (unoffical) biography it's pretty good. Sure it takes liberties with some of the stories on hand, though Amin was bat-shit crazy there is no proof that he actually was a cannibal, but as a whole it's pretty true to the dates and events that it portrays.

Joseph Olita's turn as Amin, though never going to win him an Oscar, is just the right side of fucking mental to leave you feeling that you are actually watching a man who would as soon lop your head off and store it in his freezer at home (around about 15 minutes in) as he would pin a medal on your chest. The exploitation tag really comes into full effect as the movie progresses and when it does, dealing with executions, abductions, the aforementioned cannibalism, murder and torture, The Rise And Fall is always quite happy to paint the town red.  It may not have aged well in certain places,the sound can be pretty ropey and some of the acting is Shatnerian, but all in all Amin: The Rise And Fall is worth a watch. Well..it's either this or The Last King Of Scotland.

Neil Gray is a writer from the UK. The story goes that he was invented in a laboratory experiment that went horribly wrong and has spent years devouring every movie form and film genre that was foolish enough to pass his way until he is now nothing more than a hideous monstrosity, more celluloid than man.
Retrieved from "https://www.grindhousedatabase.com/index.php?title=Amin:_The_Rise_and_Fall/Review&oldid=141088"
Category: