< Alone In The Dark

In his first directorial effort, Jack Sholder delivers a taught, well crafted psychological thriller. While this film is considered by many of its fans to be part of the early 1980s slasher sub genre, it plays well on several fronts. The first element that sets this film apart from its contemporaries is its production value. Sholder delivers an artful, tightly edited suspense/thriller that is even more impressive with the caliber of its actors. Donald Pleasence, Martin Landau, and Jack Palance provide their characters with extreme credibility. Even Dwight Schultz (the A-Team's wing-nut Murdock) helps to drive the narrative of this film along. 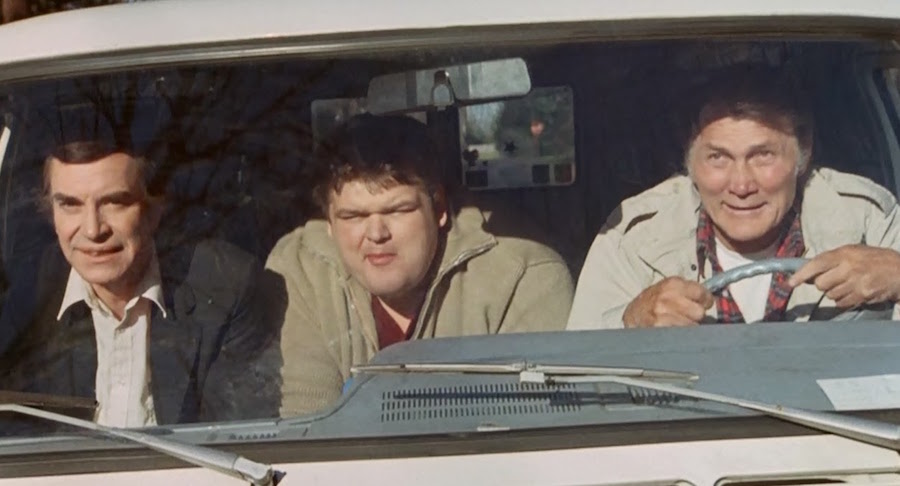 From the opening scene, a noir-like diner scene that is actually Byron "Preacher" Sutcliffe's (Landau) dream, this movie swiftly moves forward and slowly unravels into the minds of its antagonists. The setting begins in the Haven, a mental institution where the patients are referred to as "voyagers," and we get a glimpse of a disheveled group of psychotic killers including a murderer, child molester, and an arsonist. Dr. Dan Potter (Schultz) arrives at the Haven to replace a former Dr. Martin. The "third floor" voyagers are convinced by Frank Hawkes (Palance) that Potter has killed Martin. They silently begin planning their escape. 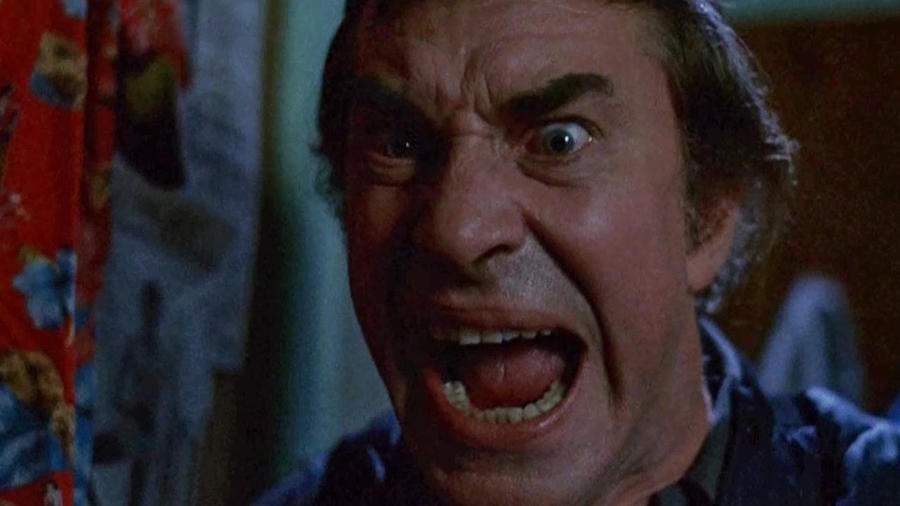 A power outage provides the backdrop that allows the mental patients to escape and the body count begins. An interesting feature introduced through this development occurs when Potter is driving home from a concert with his wife and sister. A radio broadcast announces that the blackout has been caused by an outage at a local nuclear power station. The announcer reads the official response: "Sources say the outage is either the result of human error or an act of God." The next shot reveals Sutcliffe, a Bible quoting arsonist, who sits up in bed and claims, "I made the lights go out." The effect of this shifts the rationale of the film and brings into question the actual protagonist/antagonist roles. However, it becomes clear by the end of the movie who the bad guys are supposed to be. 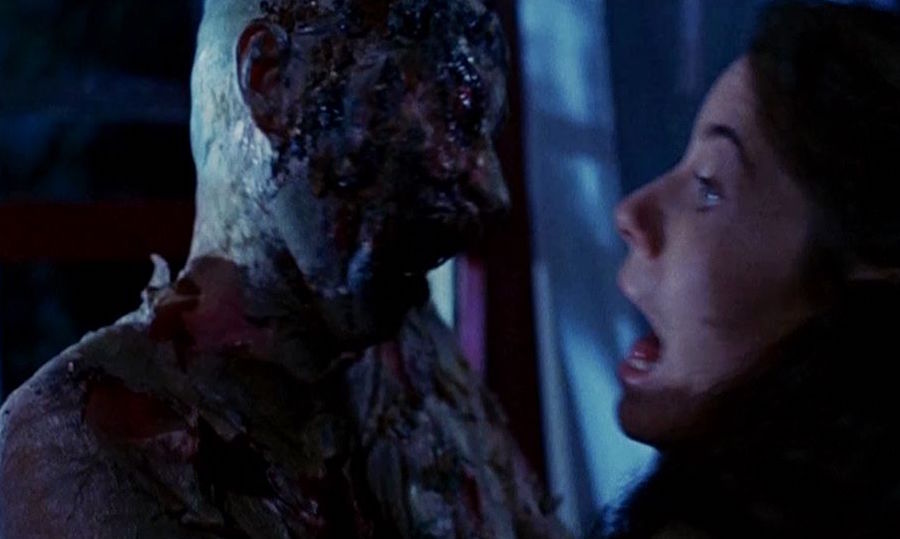 In addition, to strong characters, Sholder succeeds in slowly increasing the tension of the film's characters. Once the mental escapees make to the Potter's countryside residence, the family finds themselves trapped in the dark. The psychotic crew then begins to slowly chip away at the Potter's notion of security. By the end of the film, there are many more "reveals" that keep the motif from growing stale. 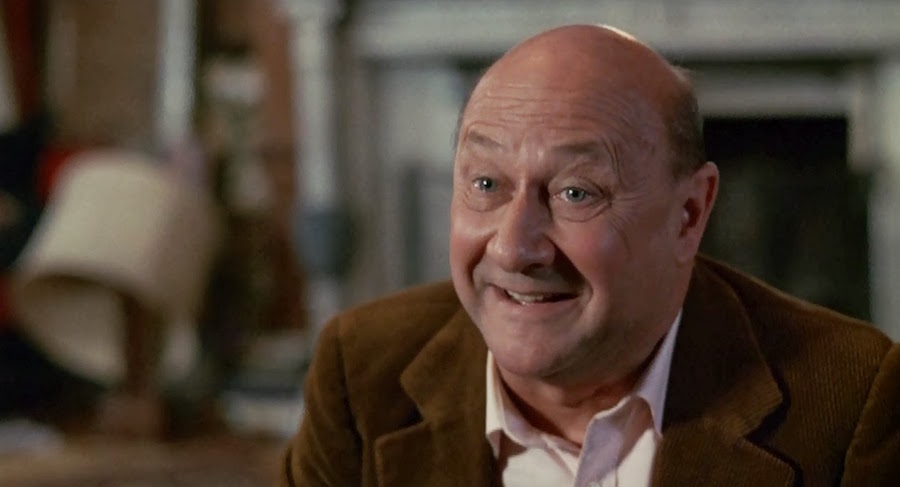 As a psychological thriller, Alone in the Dark is a must see. It also helps to know that Sholder was reading R.D. Lang at the time of writing this film (see the "Fun Facts"). For viewers familiar with Lang's work, the homage is highly effective in extending the theme of this film. While it certainly has the body count to qualify for its "slasher" status, the kills aren't that inventive. In addition, because the killers are seasoned actors, both Palance and Landau did not seem willing to go over the top with graphic violence. (Read the "Fun Facts"). 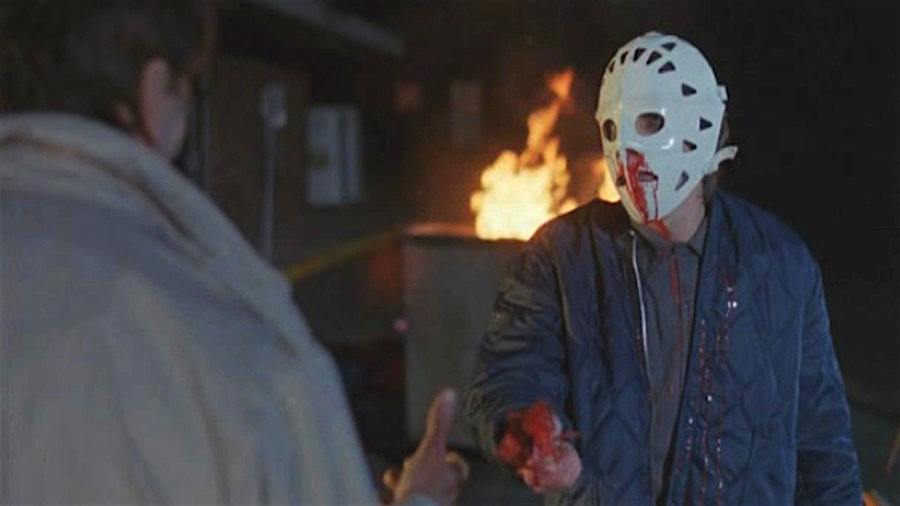 Some of the "slasher creds" from this could derive a scene when the faceless member of the escapees, known as "the Bleeder," separates himself from the group after looting a department store. He kills an anonymous man loading a van; the shot reversal reveals his close up; he is donning a hockey mask. Jason Voorhees would strap on his signature mask that same year in Friday The 13th Pt 3. In addition, FX aficionado Tom Savini was called in to design an apparition, which appeared to Potter's sister in only one scene. Sholder would go on to direct Nightmare on Elm Street Part II: Freddy's Revenge in 1985.

Regardless of how this movie should be classified, it's definitely on the list of early '80s horror films to watch.