NOTE TO READERS: Forgive me if I go overboard with the quoting.

One night, in a rough L.A. neighborhood, our heroine Billie (Karin Mani, who's like a mixture of both Miki Sugimoto and a young Roberta Findlay) gets a phone call from her neighbor saying, "I hate to bother you at this hour but, I thought I have to tell you that somebody's stealing the tires off your car!" Within a few moments, Billie's outside kicking the asses of both of the tire-snatching thugs. Billie's Grandpa (who lives with Billie) then scares them off with his gun waving. The thugs then report to their leader, Scarface (Michael Wayne...And yes, he does have a scar on his face) Scarface tells them he's gonna show them how it's done and by "Turning that tiger into an alley cat" (I love how this guy snarls his lines) But strangely, he only goes after Grandma and Grandpa! Scarface's gang then robs and beats Gramps. Then they have their last word by stabbing Granny--Who ends up in a coma. At the hospital, Billie runs into Rookie Cop, Johnny (Robert Torti) and it's love at first sight...But wait, we've got to have a little more asskickin' first! So (perhaps seeking a little vigilante justice) Billie goes for a night-time jog. Her reason? "I've got my Black Belt Trials coming up and I've got to keep in shape". Gramps gives her his gun just in case. Not surprisingly, Billie runs into Scarface's men while trying to rape a hooker. Billie puts the beatdown on the bad boys again and holds them at gunpoint. But a sleazy, crooked cop named Boyle (Jon Greene) decides to flip the script by arresting Billie for "Carrying a concealed weapon, discharging a firearm within the city limits...And trespassing!" But even in receiving probation, things look bright for Billie as she gets her Black Belt in Karate and shags Johnny The Rookie! But the fun times come to an end when Scarface forces the rape victim to drop the charges and the rapists are set free. Rightfully outraged, Billie yells at the judge to "Shove it up your ass!" Automatic jail sentence! Now we've got Billie in a WiP flick! But, sadly, not for too long. Because Johnny The Rookie's gonna blackmail the judge to have her set free. And once she's free you know the Alley Cat's gonna be a on a roaring rampage of revenge! 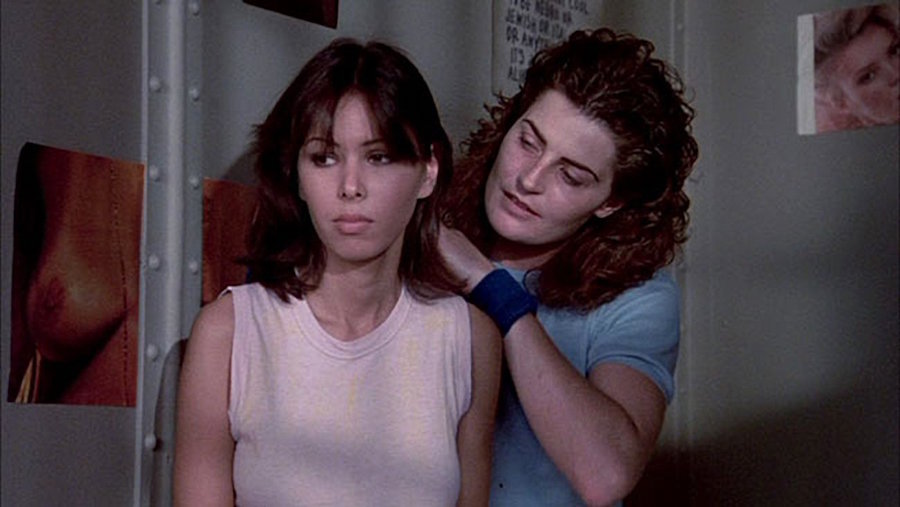 Okay, I shouldn't be praising this movie like it's some sort of classic because it sure as hell isn't. No way. But....I don't know. I just liked it for some strange damn reason! It could be because that the movie has the look,the feel, and a soundtrack that's strongly reminiscent of the 70's. Only the fashion-statements lets you know that this was made in the 80's. It could be the strangely addicting dialogue that I keep quoting. Or it could be the fact that there's gratiutous nudity occuring every 15 minutes. Or---Alright, this SHOULD be the reason. Karin Mani. Why she didn't become a big star, or at least a B-star, after this is beyond me. She's quite a striking looker and convinces the viewer that she means business, even if cheesey lines get in the way. Not to mention, physically capable of bringing the pain on Scumbags. But that's one of the weaknesses of this flick. Carnage enthusiasts will be let down by the violence, but if I can ramble on and on about things that I did like in this movie, then I guess that means this here little flick just isn't that bad afterall.