When Mr. Griffith and Mrs.. Griffith are out one night hunting alligators they bite off more than they can chew and Mrs.. Griffith suddenly becomes the late Mrs. Griffith, sparking off an investigation into her demise that will lead the people of Buttfuck USA (they never name the town so I thought I'd do it for them) into a hellish nightmare they may never wake up from in the 1980 "classic" The Alien Dead.

I don't quite know what to make of this movie.

The script is awful, the acting is so wooden you could make a whole warehouse of tables from it, the editing appears as if was done by somebody with a pair of scissors and a bottle of tequila (seriously, they don't even cut out the parts where the director has just yelled action and everyone pauses before suddenly breaking into their best acting) and the special effects...well...it's really hard to justify calling them special effects.

But underneath all of this appears to lay a very fun little movie that is so Ed Wood in structure that I kept expecting Bela Lugosi to pop up every 10 minutes or so screaming about pulling strings. Instead of Bela we have Flash Gordon himself, Buster Crabbe who isn't even the main protagonist of this tale but as he's the only bona-fide actor he gets top billing as the residents of Buttfuck USA scratch their heads, hitch up their pants and try their hardest not to get eaten. 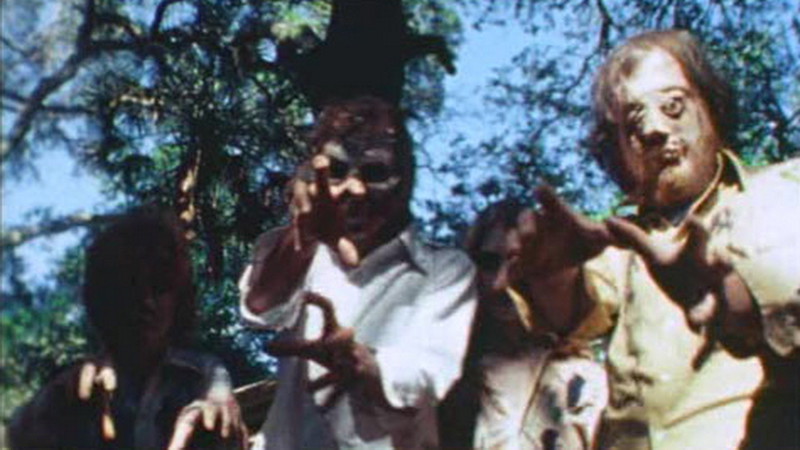 feel Fred Olen Ray must've just woken up one morning and said to himself "Fuck it, I feel like making a movie". So for that reason, and that reason alone, I recommend The Alien Dead (currently available on YouTube) a movie You see a meteor has fallen to earth and quite rudely crashed into a houseboat, turning all it's occupants into Zombies (Space Zombie's? Yeah, we'll go with that). Now these Space Zombies are quite happy to keep themselves to themselves and chow down on the local gator population until they manage to eat every last one in the swamp and then it's time to start on the humans.

People get eaten on bridges, people get eaten chopping wood, hell, people even get eaten under water, sneaky Space Zombie bastards, while the local police walk around telling everyone not to worry as it's just a rogue gator, which the populous quite happily accepts even though THE ENTIRE TOWN seems to be in agreement that there hasn't been a gator sighting in months.

So it's left to a local scientist, his trailer park girlfriend who he hooks up with about 5 seconds after meeting (redneck's, what'cha gonna do) and the local game warden to find out what's really causing all the locals to start, quite literally, popping up with huge chunks missing out of them (Hint: It's Space Zombies.) and how best to deal with it (Hint: you can't, you're fucked)

Now, if I was to rate this as a standalone film, I'd be looking to give it a minus score if at all possible but it's obvious that this was a labor of love for writer/director/guy playing pool Fred Olen Ray. It doesn't take a genius to figure out that he put a lot of his own money into this and managed to max out his credit cards to get it made and for that alone he deserves to be applauded.

Sure it's terrible and to call it rough around the edges would be a major understatement but underneath it all there's a certain innocent charm where you so goddamn awful it has to be seen to be believed.

Neil Gray is a writer from the UK. The story goes that he was invented in a laboratory experiment that went horribly wrong and has spent years devouring every movie form and film genre that was foolish enough to pass his way until he is now nothing more than a hideous monstrosity, more celluloid than man.
Retrieved from "https://www.grindhousedatabase.com/index.php?title=Alien_Dead/Review&oldid=157708"
Category: