If you have a younger sibling you'll remember what it was like growing up with them. They were always the favorite, they always got what they wanted, they'd cry and whine and complain just to get you into trouble and even though some days you'd just want to kill them, you'd never actually go through with it. Would you?

Welcome to the weird, disturbing world of Alice, Sweet Alice.

Alice Spages (played by Paula Sheppard) seems like a normal 12 year-old girl (even though Sheppard was actually 19 when she played the role) who we first meet when, along with her mother Catherine (played by Linda Miller) and her 9 year old sister Karen (played by Brooke Shields...yes THAT Brooke Shields), she's paying a visit to Father Tom (played by Rudolph Willrich). Father Tom is the head priest of St. Michael's Parish Girls' School that they both attend and he's invited the family over as he wants to give Karen a present on the eve of her First Communion. Now I'm going to say right off the bat here that I find Father Tom just a tad creepy. If that was intentional or not I don't know but he seems far too interested in Karen than he should and the worst thing is that the mother seems to encourage it. There's a line that she delivers a little later when Karen is putting on her Communion dress that goes: "You're going to be the prettiest girl there, wait til Father Tom sees you." See what I mean?

Anyhow the gift he gives Karen is his mother's crucifix, you know as you would, and this is kind of the catalyst for all of Alice's weird ass behaviour from here on out, starting with her donning a plastic mask and scaring the hell out Father Tom's housekeeper Mrs Tredoni (played by Mildred Clinton). Alice then proceeds to steal Karen's favorite porcelain doll to lure her into an abandoned building so she can have the scary plastic mask treatment before locking her in a random room.  When she finally let's Karen out she warns her if she tells anyone what happened she'll never see her doll again.

After some more of Alice's zany behavior at home and Karen behaving like the brat...er...youngest child she is we take a little detour to meet their landlord Mr Alphonso (played by Alphonso DeNoble) who's introduced as the resident pedophilliac with all the subtlety of a sledgehammer to the face. You know, overweight, wears nothing but his grubby underwear, lives alone with his cat (who he talks to as if he's it's mother), that kind of thing. Then it's off to Karen's First Communion, which doesn't go well for her partly because she seems nervous but mainly because she's strangled by someone wearing a plastic mask and a yellow raincoat. Yup, that'll put a crimp in your day.   Now considering that Brooke Shields couldn't have been much older than the character she was playing at the time, her death is pretty good and not the horrible over-acted mess you'd expect from a child actor, add to that the utter shock and horror that is displayed by the rest of the cast on the discovery of Karen's body and you've got yourself a pretty disturbing scene.

With Karen in the ground we're introduced to Catherine's ex-husband Dominick "Dom" Spages (played by Niles McMaster) who's in town to help find Karen's killer and Catherine's sister Annie DeLorenze (played by Jane Lowery) who moves in with them to help Catherine through her grief. It's obvious that Alice has nothing but contempt for her old man and nothing but hatred for her aunt and after listening to them talk for 5 minutes you probably will too but that's o.k folks as this is a horror movie and you need characters like that so when/if they get what's coming to them you can cheer and not feel bad about it. The hatred that Alice has for her aunt isn't just a one way street mind you, which we find out as soon as the kids leave the apartment with good old Aunt Annie "suggesting" that Alice might've bumped off her sister, what with Alice being the last person to see Karen alive, added to the fact that she had the veil from Karen's dress in her pocket. 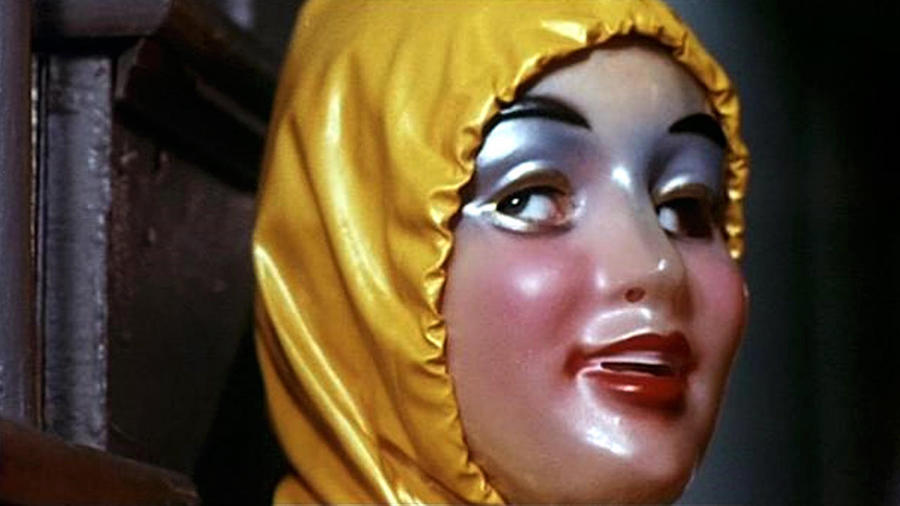 This is then backed up after the next scene where Dominick's visit to the local gendarme doesn't go particularly well. They want to talk to Alice about the veil and pretty much come right out and say "We think she did it" to which he tells them to go copulate themselves and walks out. After he's left we find that John Q. Law has spoken to the principal at Alice's school who has made repeated requests for Alice to see a psychiatrist but for some reason or another these requests have been ignored. This leads one of the coppers to offer his own diagnosis of "This kid's nuts" after looking over her school record.

Back at The Spages residence all is going as smooth as you'd expect, Catherine's upstairs having a minor breakdown while Alice and her Aunt are downstairs ripping chunks out of each other, not literally you understand, over spilt milk, which is literally you understand as Alice drops a pint of milk and it all kicks off. Well Catherine comes to the rescue, calms everyone down and sends Alice off to drop the rent of with Pedobear Alphonso. This is not the brightest move she's ever had. What is it about horror movies and people having their common sense glands removed?

Mr Alphonso looks like a writer's idea of a pedophile. He's supposed to portray a man who molests children in between snacks, the kind of person you'd keep as far away from your kids as you could, preferably with the use of a large cattle prod and yet here's Alice's mum quite happy to send her last remaining child down into the lair of the fat ass beast.  Schmuck. So Alice visits Mr Alphonso, Mr Alphonso tries to molest Alice. Alice kills Mr Alphonso's cat. Fair trade, if somewhat harsh on the cat.

From here on out it's all set up for you to think that Alice is bat-shit crazy and would rather eat your soul than look at you.  We see shots of Alice setting fire to bugs then we see the plastic masked killer lurking under the stairs before trying to cut Aunt Annie's leg off. While in hospital, Loving Aunt Annie accuses Alice of trying to kill her and, even though Catherine says she's only doing it to cover up for her own daughter Angela (played Kathy Rich) this results in Alice being carted off to the for a lie detector test which Alice fails, leading to Alice being sent for psychiatric evaluation.

So with Crazy Alice in Crazy Town, Wet Dad Dom gets a phone call from a distressed Angela who says she's run away from home as Loving Aunt Annie won't let her return Karen's Crucifix which she somehow has managed to get her hands on. After Wet Dad has calmed Angela down they agree to meet in an abandoned building. Cause yeah, that sounds safe. On arriving Dominick see's someone in a plastic face mask and yellow rain coat who he follows inside believing to be Angela. When he finally catches up with her he tells her she doesn't have to be afraid of him and she replies by smashing his brains in with a rock. Maybe you could do with working on your people skills a little my friend.

With Dominick somehow still alive the plastic mask killer decides the best thing to do is to tie him up with some rope and throw him out of a large set of double doors to his doom but just before she does that she removes her mask to reveal that she is in fact Mrs Tredoni....er...what?

Yes folks, it turns out that it was Father Tom's housekeeper all along that was the plastic face killer. Bet you didn't see that coming...no really...Turns out that Mrs Tredoni is somewhat fucking mental and has decided that God wants Dominick and his "whore" (her words not mine) ex-wife punished for indulging in pre-marital sex.  Well, glad that's all cleared up then.

After she's thrown Dominick into the great wide open Mrs Tredoni takes a quick trip to confession, where she doesn't really confess anything and heads back home where she goes about her daily chores until she is interrupted by Catherine who has stopped by to visit with Father Tom. This culminates in a scene in the kitchen where Mrs Tredoni explains how the children must pay for the sins of the parents and how she was sent there to look after Father Tom not Catherine.  Luckily for Catherine, Father Tom shows up before she can be chopped up into hamburger.

Down at the mortuary the autopsy reveals that Dominick had a cross lodged in his throat that he bit off of Mrs Tredoni before she hucked him out the window,this gives the police the idea that Alice might not be guilty after all and maybe we should take a closer look at Mrs Tredoni.

By this time Not-So-Crazy-Yet-Still-Pretty-Fricking-Mental Alice has been released from Crazy Town and as her first act of freedom she dresses up like the plastic face killer, breaks into Pedobear's apartment and puts a jar of cockroaches on him as he sleeps. After Alice leaves Mrs Tredoni, dressed in the same outfit (don't you just hate that when that happens?) shows up and knocks on Pedobear's door. He wakes, freaks out at the cockroaches and runs outside where he bumps into Mrs Tredoni who he mistakes for Alice. Trying to strangle her, he accidently pulls off her mask and gets a large kitchen knife in his chest for his troubles.

Mrs Tredoni makes a break for it and heads to the Church where she waits to take communion,while outside Father Tom is being told by the police that Mrs Tredoni is the killer. "Don't worry, I'll get her to come quietly" says Father Tom.  Famous last words eh? As she waits in line for her waffer, Father Tom refuses and explains that the police are waiting for her outside. Mrs Tredoni doesn't take this news very well as you can imagine and after the line "But you give it too that whore!!!" pointing at Catherine, she stabs Father Tom repeatedly in the neck with her very large kitchen knife. As everyone else rushes to the front of the church to be near Father Tom we see Alice walk to where Mrs Tredoni was sitting, pick up her bag and stare into the camera as the movie ends, suggesting that she herself is just as bat shit crazy as Old Mrs Tredoni.

I like what Alfred Sole tried to do with this film, which is make a slasher flick where the main protagonist is a young child.  You might find out towards the end that it isn't and is in fact a old Italian woman but with the final shot he does leave the lingering question as too whether or not Mrs Tredoni was responsible for all the murders we have just witnessed.  Sure, the music that accompanies it is a bit cheesy and the whole thing is, at times, held together with a weird and slightly disturbing sexual undertone involving Alice, shudder, but overall it's a pretty solid scare fest and not a bad way to spend 108 minutes.

Neil Gray is a writer from the UK. The story goes that he was invented in a laboratory experiment that went horribly wrong and has spent years devouring every movie form and film genre that was foolish enough to pass his way until he is now nothing more than a hideous monstrosity, more celluloid than man.
Retrieved from "https://www.grindhousedatabase.com/index.php?title=Alice,_Sweet_Alice/Review&oldid=151405"
Category: