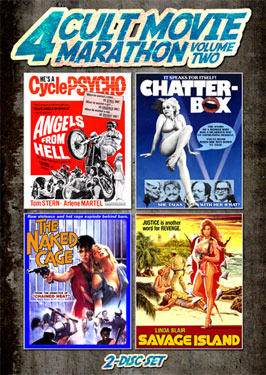 Angels From Hell: 1968/Color/R/86 minutes/Anamorphic Widescreen (1.85:1)/Dolby Digital Mono. Cycle-psychos vs. the cops! A Vietnam war hero returns home and decides to build the ultimate outlaw biker gang. A war between the gang and the police is about to erupt!

Chatterbox: 1976/Color/R/76 minutes/Full Frame/Dolby Digital Mono. From the director of Hell Night and The Concrete Jungle comes a tale of a starlet whose life and career are severely altered when her reproductive organs begin to sing and talk. Starring Candice Rialson (Candy Stripe Nurses) and Rip Taylor!

The Naked Cage: 1986/Color/R/97 minutes/Full Frame/Dolby Digital Mono. Michelle and Rita are arrested for theft and placed in the same cell. Their conflicts and personality clashes lead to screaming battles and cat fights before a prison riot brings deadly violence and a newfound respect for each other. Shari Shattuck (Arena) and Angel Tompkins (The Teacher) star.